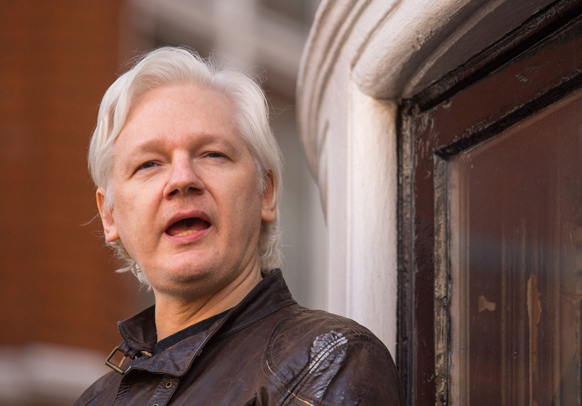 Mr Assange has been inside the Ecuador embassy in London since 2012. Photo: AAP

Australian Julian Assange will be expelled from the Ecuadorian embassy within “hours to days”, according to WikiLeaks.

The organisation reported in a tweet on Friday that its founder was about to be kicked out of the London embassy, and there was already a deal with Britain for his arrest.

Mr Assange has been living in the Ecuadorian embassy for nearly seven years amid fears he will be extradited to the US to face charges if he leaves.

BREAKING: A high level source within the Ecuadorian state has told @WikiLeaks that Julian Assange will be expelled within "hours to days" using the #INAPapers offshore scandal as a pretext–and that it already has an agreement with the UK for his arrest.https://t.co/adnJph79wq

The INA papers WikiLeaks refers to in its tweet are documents leaked to an Ecuadorian politician that have implicated President Lenin Moreno in a corruption scandal.

The WikiLeaks statement comes two days after Mr Moreno accused Mr Assange of repeatedly violating the terms of his asylum and said Quito was seeking an arrangement with Britain to allow him to leave the embassy.

Mr Assange’s relations with his embassy hosts have deteriorated in the past year. Last year, Ecuador cut off his internet and issued a nine-page memo demanding he steer clear of sensitive topics and concentrate on the “wellbeing, food, hygiene and proper care” of his cat.

Shortly after the WikiLeaks tweet, Mr Assange’s mother, Christine Assange, called for a citizens’ vigil and for his release to be livestreamed on the internet.

Journo Julian Assange about to be handed to UK police! (US)

Australian journalist John Pilger also called for people to fill the streets outside the London embassy to protect Mr Assange and “show solidarity with a courageous man, whose struggle ought to touch us all”.

Twitter user @Ruptly quickly responded to the livestream call, broadcasting from outside the embassy where a row of orange tents is set up along the fence line.

Mr Assange took refuge in Ecuador’s embassy in 2012 after British courts ordered his extradition to Sweden to face questioning in a sexual molestation case.

The case was dropped, but supporters have said Mr Assange fears he could be extradited to the US if he leaves the embassy over the publication of US diplomatic and military secrets by WikiLeaks.

In December 2018, Mr Assange’s father, John Shipton, called for his son’s “torment” to end, saying his health was declining after years of stress.