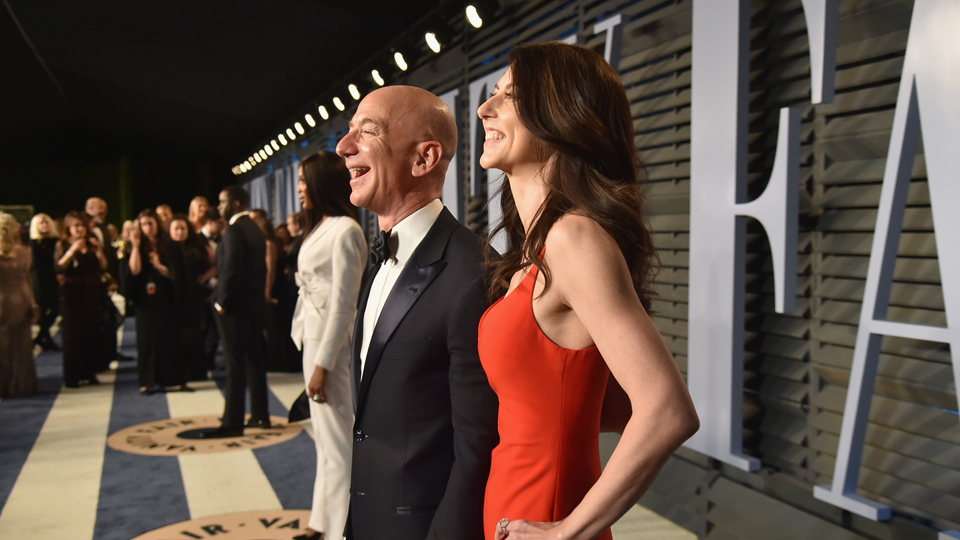 Jeff and MacKenzie Bezos at the Vanity Fair Oscars party in March 2018.

In an extraordinary blog post, Billionaire Amazon founder and CEO Jeff Bezos has accused US tabloid The National Enquirer of “extortion and blackmail” after it threatened to publish compromising photos of him.

In the post, published on Medium, and titled ‘No thank you, Mr Pecker’, Mr Bezos revealed what he said was a full suite of emails his representatives were sent by executives with AMI, publisher of the Enquirer.

“Something unusual happened to me yesterday. Actually, for me it wasn’t just unusual — it was a first. I was made an offer I couldn’t refuse,” he wrote.

“Or at least that’s what the top people at the National Enquirer thought. I’m glad they thought that, because it emboldened them to put it all in writing.

“Rather than capitulate to extortion and blackmail, I’ve decided to publish exactly what they sent me, despite the personal cost and embarrassment they threaten.”

Mr Bezos, 55, claims the publication allegedly threatened to publish nude photos of him unless he dropped an investigation into leaked text messages that were published shortly before he announced the end of his 25-year marriage to author MacKenzie Bezos, 48.

I’ve written a post about developments with the National Enquirer and its parent company, AMI. You can find it here: https://t.co/G1ykJAPPwy

In one email, AMI’s chief content officer Dylan Howard – an Australian former Seven Network reporter – describes one of the photos allegedly obtained by the publication as a “below the belt selfie – otherwise colloquially known as a ‘dick pick’.”

Other photos described in the email include half-dressed selfies of Mr Bezos and photos of his reported new partner, former Fox news anchor Lauren Sanchez, that Mr Howard described as “revealing her cleavage”.

Mr Bezos alleges AMI used the photos as leverage to force him to issue a statement saying AMI had no political interests in pursuing a story about his affair.

Instead of making a deal, Mr Bezos decided to go public.

“Of course I don’t want personal photos published, but I also won’t participate in their well-known practice of blackmail, political favours, political attacks and corruption,” he wrote.

“I prefer to stand up, roll this log over and see what crawls out.

“If in my position I can’t stand up to this kind of extortion, how many people can?”

The bad blood between the world’s richest man kicked into high gear last month when the Enquirer ran a story about Mr Bezos’ alleged extramarital affair.

The tabloid reported Mr Bezos sent “sleazy text messages and gushing love notes” to Ms Sanchez, 49, while he was still with his wife.

He fought back by hiring a team of private investigators to uncover how the Enquirer got hold of explicit texts between him and a woman who was not his wife.

According to an email, Mr Bezos suspected US President Donald Trump (who tweeted in January that the Amazon mogul’s divorce “is going to be a beauty”) had a hand in leaking his private texts.