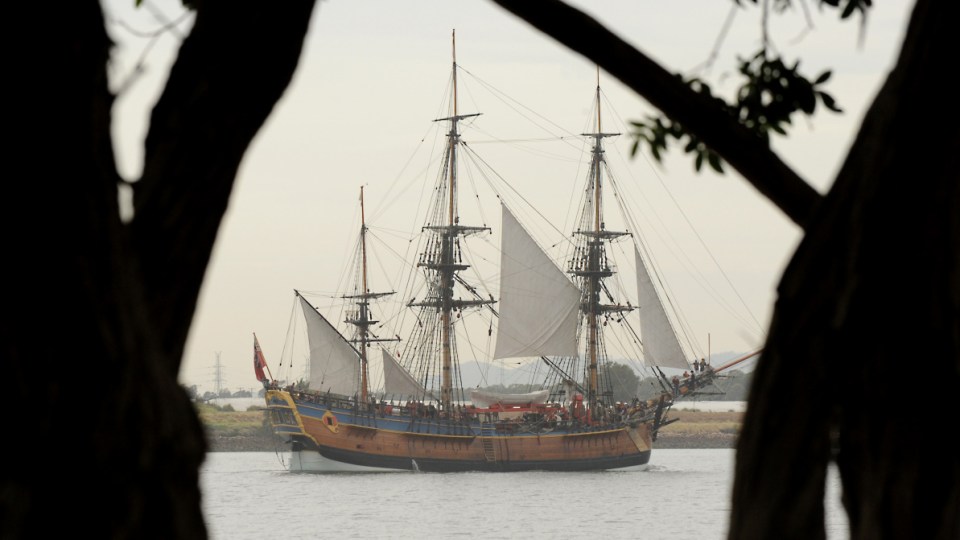 The replica Endeavour sails up the Brisbane River in 2008. Next year, it will circumnavigate Australia. Photo: AAP

Prime Minister Scott Morrison says it’s time to “rediscover” Captain James Cook because he gets “a bit of a bad show”.

Mr Morrison plans to kick the “rediscovery” along with more than $12 million in projects to mark the 250th anniversary of Captain Cook’s first voyage to Australia and the Pacific.

They include a circumnavigation of Australia by a replica of the Endeavour to mark the anniversary of James Cook’s maiden voyage to Australia in 1770.

On radio on Tuesday, Mr Morrison described the planned journey as a “re-enactment”. In fact, although Captain Cook made three voyages here, he never actually circumnavigated Australia.

Then-lieutenant James Cook embarked on his first Pacific voyage on board Endeavour in 1768, to chart the transit of Venus.

He went on to map the east coast of Australia, making first landfall at Botany Bay in April 1770.

Two months later the Endeavour struck the Great Barrier Reef. That delayed the voyage for seven weeks while the crew carried out repairs at the site of what would become Cooktown.

From there, the Endeavour sailed around Cape York, through the Torres Strait and on to what was then known as the Dutch East Indies.

“The thing about Cook is I think we need to rediscover him a bit because he gets a bit of a bad show from some of those who like to sort of talk down our history,” Mr Morrison told Cairns radio on Tuesday.

“It’s very trendy to talk down James Cook and all that sort of stuff, but this guy was an enlightened man for his generation and his time.”

Projects for the Cooktown 2020 Festival will receive $5.45 million to develop and upgrade sites, but also to celebrate local indigenous culture as the region becomes the focal point of the anniversary.

The Australian National Maritime Museum gets $6.7 million to sail the Endeavour replica from Sydney in March 2020, heading south to Hobart before turning north and sailing around the country’s coastline.

It will call in at some ports and sail by specific locations, with 39 stops proposed where it will host events and activities.

Opposition Leader Bill Shorten, who was in Queensland to announce a policy on hydrogen energy, welcomed the government’s funding announcement.

However, he insisted Labor was more focused on the future than the past.

“I think we’ve got to respect our history and what happened in 1770, but I’m also interested in what happens in Australia in 2070.”