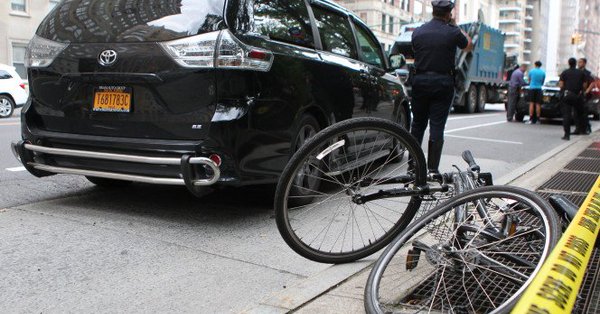 A young Australian tourist holidaying in New York City has died after colliding with a garbage truck as she swerved to avoid a vehicle blocking a bike lane near Central Park.

Police said Madison Jane Lyden, 23, veered into traffic on Friday about 4.45pm (local time) when a car suddenly pulled in front of her from the kerb as she rode along Central Park West between 66th and 67th streets.

Local media reported Ms Lyden was riding a rental bike when she was suddenly forced to veer around an Uber blocking the bike lane.

As she merged into traffic, a “private sanitation truck” hit her, according to the New York Post, suffering severe head trauma.

Ms Lyden was rushed to Mount Sinai West Hospital where she died.

Fairfax Media reported an account by Jorge (surname withheld), a doorman who was standing nearby when the accident occurred.

“It was in the middle of rush hour, there were cars going and cars coming,” he was reported as saying.

“The truck went on top of her,” he said. “I saw people screaming. They were saying, ‘Please wake up! People, please, call 911′,” Fairfax reported.

An advocacy group said it was “a crash waiting to happen” because “lazy and entitled drivers” are parking, dropping people off and idling in bike lanes.

Transportation Alternatives said Ms Lyden’s death “underscores the need for every major street in New York City to have a safe, protected space to travel by bike”.

In a statement posted on Twitter, the group’s spokesperson Paul Steely White said: “Madison Jane Lyden is dead because her bike lane was blocked. It’s tragic, yes, but all the more unconscionable because this was a crash waiting to happen.”

“As a city we should be ashamed, because this death could have been prevented. More and more people are traveling by bike in our city, and they need safe, protected space,” he wrote.

According to Ms Lyden’s Facebook page, she was a swim instructor at Leisurelink in Geelong and a former student of MacKillop Catholic College in Hobart.

In an interview with local news website West Side Rag, Police Captain Timothy Malin said: “Our preliminary investigation has found that the actions of the bicyclist did not contribute to the collision.”

“The actions of the TLC [livery] vehicle driver did contribute to the collision. Whether that driver receives summonses or is arrested depends on the District Attorney’s office.”

Captain Malin told the website the garbage truck driver was arrested at the scene and will face charges of driving under the influence – several beer cans were found in the truck – and for driving a carting vehicle on a no-truck route.

The New York Daily News quoted a witness saying Ms Lyden was not wearing a helmet and was traveling with a companion when she was struck.