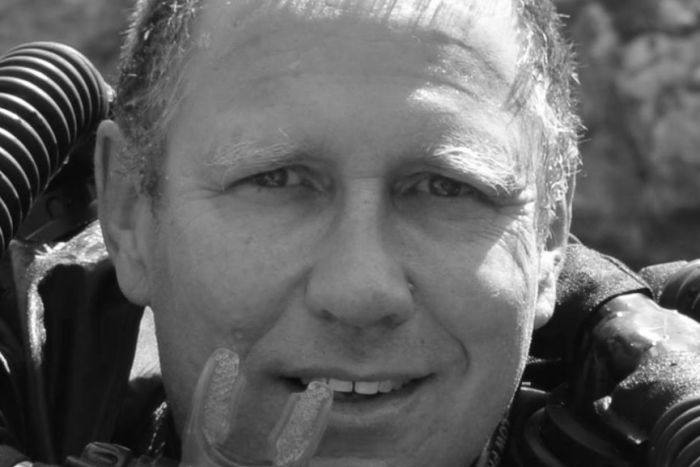 The Aussie anaesthetist who was pivotal in saving the Wild Boars soccer team has revealed the moment he feared most after one of the boys developed breathing difficulties during the daring rescue.

Dr Richard Harris disclosed how one boy with a chest infection struggled to breathe after being administered the sedatives that allowed divers to safely evacuate the entire team and their coach from the Tham Luang Nang Non caves in Thailand.

“He was over-sedated,” Dr Harris told a medical conference in Sydney. “I ended up lying on a bit of sand with him for about half an hour, sort of just spooning him I guess, holding his airway open, and thinking ‘This what I predicted would happen — this is going to go really badly’.

“Then he sort of fired up and ended up needing another dose to put him back in the water about 200 metres down the track.”

Speaking at the SWAN 2018 conference on critical care on Saturday, Dr Harris explained how he had to push each boy’s face into the water after they had been sedated to test if it was safe, which “felt really wrong” initially.

Dr Harris administered the boys Alprazolam and ketamine to prevent them from panicking under water and putting their safety and that of the rescue divers at risk.

Divers with no medical background then had to administer a top-up of ketamine in dry sections of the cave complex during the hours-long swim and crawl to the outside world.

Dr Harris, who was awarded Australia’s second-highest bravery award for his role in the rescue, said the sedatives caused the boys to experience about 30 seconds of apnoea before they would breathe normally.

“I started saying to them … watch this, you’ll stop breathing for a few seconds,” he said.

The Adelaide diving expert, who was hailed by Prime Minister Malcolm Turnbull as one of the “greatest examples of every Australian value we hold dear,” also revealed how the rescue team took care not to make the boys extra anxious. Worried that some of them might be afraid of needles, he made sure not to administer the injections in front of the whole team.

“We got the Navy SEALs up the top of this hill to put them around the corner and got them sitting down so they weren’t watching what was happening to their mate,” he said.

Dr Harris said the boys seemed to take the news of a life-or-death escape plan calmly when it was explained to them by one of their countrymen as they didn’t understand the massive risks involved.

He had written a note containing the details of their sedation to be translated into Thai and read to them for ease of communication.

“Ignorance was bliss for them, I think,” he said.

The dramatic rescue bid, which involved an international team of almost 100 divers, was considered so risky that the Australian government negotiated diplomatic immunity for the Australians involved in the event of anything going wrong.

The successful evacuation of all 12 soccer players and their coach from the 3.2-kilometre cave complex was described as a miracle after experts involved in the operation admitted they hadn’t expected the whole team to survive.

Tragically, Petty Officer First Class Saman Kunan, a former member of Thailand’s elite Navy SEAL unit who was part of the rescue team in Chiang Rai, died during the rescue while attempting to lay air tanks along a potential exit route.

Dr Harris and his dive partner, Dr Craig Challen, were awarded the Order of Australia for their efforts during the rescue during a ceremony in Canberra last week.

It was later revealed that Dr Harris’s father had died while he was in Thailand at the forefront of the rescue.

Seven other Australian men – six AFP members and one navy officer – were awarded bravery medals as well as OAMs for “acts of bravery in hazardous circumstances”.

Cave hero reveals the moment he feared most