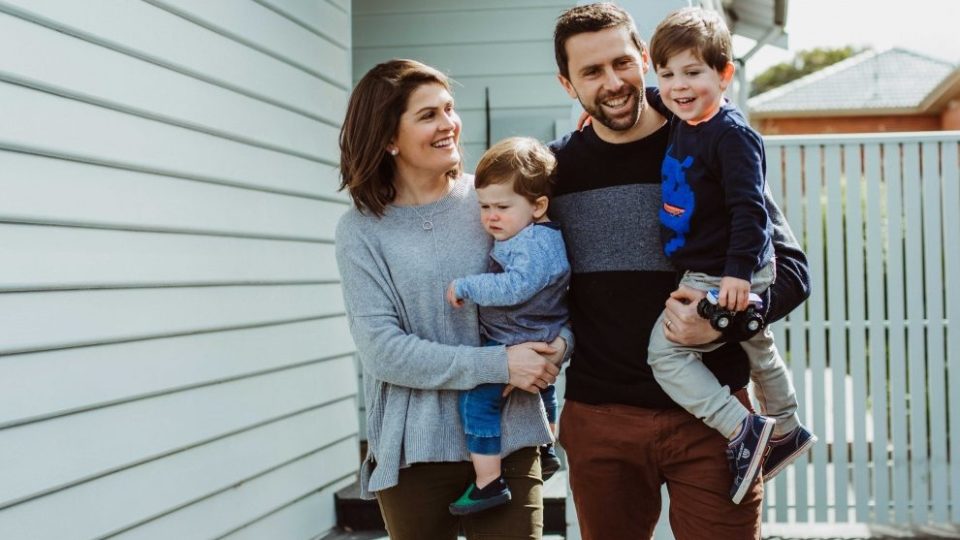 Five days before Sara Chivers died in a sunlit Melbourne hospice room on the morning of January 28, her family gathered at her bedside to toast her with pizza and a bottle of Grange.

“We thought she was going then,” says her mother, Helen Clark.

Her toughness was no surprise to those who loved her. If anyone could pull off a challenge, it was Sara, the Melbourne mother-of-two whose letter to her sons Hugh, now 3, and Alfie, 21 months, as she was facing her mortality last October made global news and did what she wanted it to do, raise money and awareness for brain cancer.

Waking on her daughter’s last day, Helen – sleeping at the hospice with the rest of the family, Sara’s father Adrian, brother Mike and sister Stephanie – kissed her forehead and said hello. Then Sara stopped breathing.

“It was a privilege to be there,” says Helen. “It was actually really, really beautiful. Hard to believe, but it was.”

Her engineer husband Leigh Chivers, 34, who had been at home with Hugh, arrived soon after to be with his wife.

“When she did pass, after an hour or two she looked like she did on our wedding day,” he says.

“All her features really came out. She looked so young.”

Diagnosed with three incurable brain tumours last March – she had previously fought the disease in 2008 – the marketing executive was still absorbing her death sentence when the next hammer blow fell.

In a rare and shocking coincidence, in September Alfie was also diagnosed with brain cancer.

Facing the unimaginable galvanised Sara. Wanting to leave her boys a tangible legacy, she publicised her reality in the hope it would open government purses and find a cure in time to help Alfie.

Sara and Leigh turned to fundraising, and in December, Alfie was on his wheelchair-bound mum’s knee when she presented The Project’s Carrie Bickmore with a cheque for over $60,000 for her brain cancer charity, the money all raised in months.

Palliative care is no place for a young mother who had run half marathons and moved to London solo for work. Sara turned it into her private HQ; increasingly unable to talk, she welcomed friends with cakes and coffee, and wept with disbelief seeing her story in Vogue in a copy the magazine expressed to her as time ran out.

“Even in the last weeks when she was struggling to talk and couldn’t walk, she still managed to laugh,” says her friend Mia Greves.

“No, it was more of a roar! I’m grateful that cancer didn’t rob her of that. My mate Sara was still there.”

But the heart of her struggle was definitely not glamorous. Fighting pain and grief, she defied doctors and her own trenches in the sand – passing Christmas and slamming down 2017, the cruelest of years.

Was she ready to go? “No,” says Leigh. “Her resilience was ridiculous.”

Alfie has been in hospital since his diagnosis and will be until at least June. He’s having stem cells harvested next week and his latest chemotherapy is “going well”, says Leigh. “He’s happy just now.”

The couple met at a rowing party in their early 20s (Sara was dressed as Britney Spears in the Baby One More Time video) and once during a geographically-enforced break, arranged to meet up at a Slovenian railway station.

“It was the middle of winter, somewhere between zero and minus 10. Eastern Europe, grey, ice on the ground,” says Leigh, who was shivering in polar fleece and hiking boots.

“I hear, ‘clip, clop, clip, clop’ and she comes around a corner in tight leather pants, high heels, a floral top, makeup and hair done, designer bag in tow, slipping on the ice. She didn’t care – she wanted to look hot and she did.

“In those days, her style could be more fashion over function. And she was doing what Sara always does. I loved her honesty and courage to just be herself all the time.

“She was confident about who she was and what her values were. She was elegant. Beautiful.”

Things Sara loved: Whittaker’s coconut chocolate, homewares, TV crime shows, writing cards, Florence and the Machine’s Never Let Me Go. “It was our wedding song and every time it came on in the car, Sara would cry,” says Leigh.

Things Sara loathed: Odd numbers. “Bad manners,” says Helen. “And I made her cry lots of times by tearing the sealed section out of her Dolly magazines when she was 13 – she didn’t care that she couldn’t read them, she hated the magazines being ruined.”

For now, Hugh has been told his mum was very sick and has died, but “he doesn’t understand”, says Leigh. “He just says OK, then runs off and does something else.”

He’s determined the boys will grow up with their mother as part of their daily lives. “The obvious thing to tell them is how much she loved them,” he says, “but also how she was such a good mother to them in that short period of time. She was great at it.”

On Boxing Day, Stephanie, 29, read her sister a letter she’d written to her, which she shares with The New Daily.

“Thinking about growing up with you … making you hold my hand when we’d go to sleep. Sitting outside your door when you had friends over. Literally copying word for word things you’d say.

“I promise to always support Leigh. I will always be there to look after your beautiful boys, to tell them how proud you are of them.

“I don’t know how to be me without you. But I know that there is a higher love – down in my heart and hidden in the stars above.

“I hope you know how special you are. I love you.”

You can donate to a Go Fund Me page set up by Sara’s sister, Stephanie, to raise money for Alfie’s care, or to Sara’s favorite charity, the Cure Brain Cancer Foundation.

‘She looked like she did on our wedding day. So young’: Cancer mum Sara Chivers dies