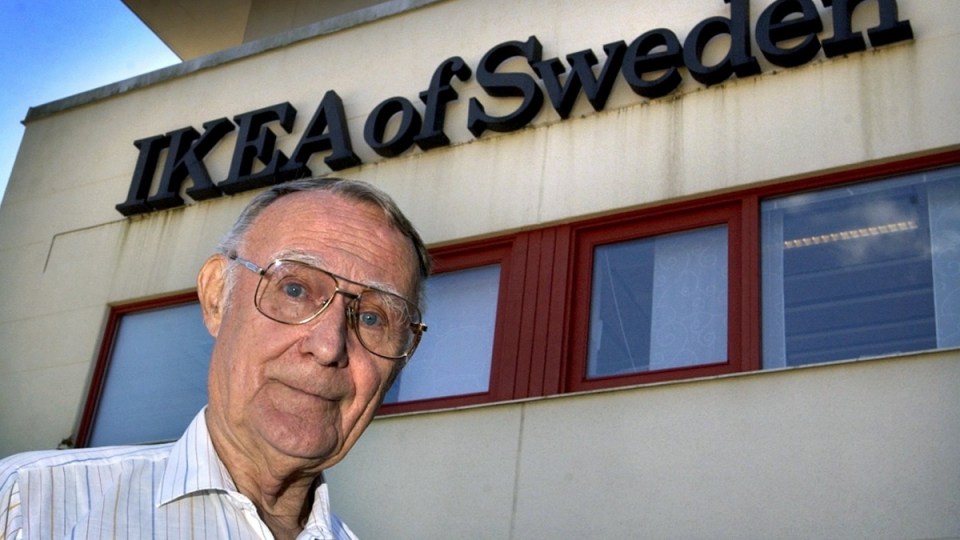 Sweden's national icon and the founder of Ikea, Ingvar Kamprad, has died. He was 91-years-old. Photo: AAP

Ingvar Kamprad, the billionaire founder of the IKEA retail empire whose cheap, functional furniture is a feature of homes around the world, has died at the age of 91.

Born on March 30, 1926, in southern Sweden, Kamprad started by selling matches to neighbours at the age of five and soon expanded his range to include seeds, Christmas tree decorations, pencils and ball-point pens.

He founded IKEA in 1943 when he was just 17, but didn’t hit gold until 1956, when the company introduced flat-pack furniture.

The idea came to him as he watched an employee taking the legs off a table to fit it into a customer’s car and realised that saving space meant saving money.

Always looking to cut costs, Kamprad bought much of IKEA’s furniture from then communist Poland in the 1960s.

Outlining the IKEA philosophy in his “Testament of a furniture salesman” in 1976, Kamprad said wasting resources was “a mortal sin”.

Revenues were more than 38 billion euros ($59 billion) last year and the IKEA annual catalogue is said to be more widely read than the Bible.

Despite his success in building the IKEA business, Kamprad was a controversial figure.

He was forced to apologise for his time as a member of the New Swedish Movement, a nationalist, far-right group that supported fascist parties around Europe, in the 1940s.

Kamprad returned to Sweden in 2014 after a reorganisation of IKEA’s complex ownership slashed his tax bill and left him with little formal influence.

Peter Dutton touted as next Liberal leader as he claimed victory in Dickson
‘The urgency of the situation’: WHO steps in as monkeypox cases erupt around the world
Volodymyr Zelensky: How war will end as Ukraine ‘breaks backbone’ of Russian army
Jim Chalmers decries Coalition waste as Labor hits the hustings amid downpours in Queensland
Anthony Albanese, Scott Morrison cast their votes in Sydney
Australian aces at French Open out to show there’s life after Ash Barty
Real love or all for show? How The Bachelor couples have endured
Today's Stories