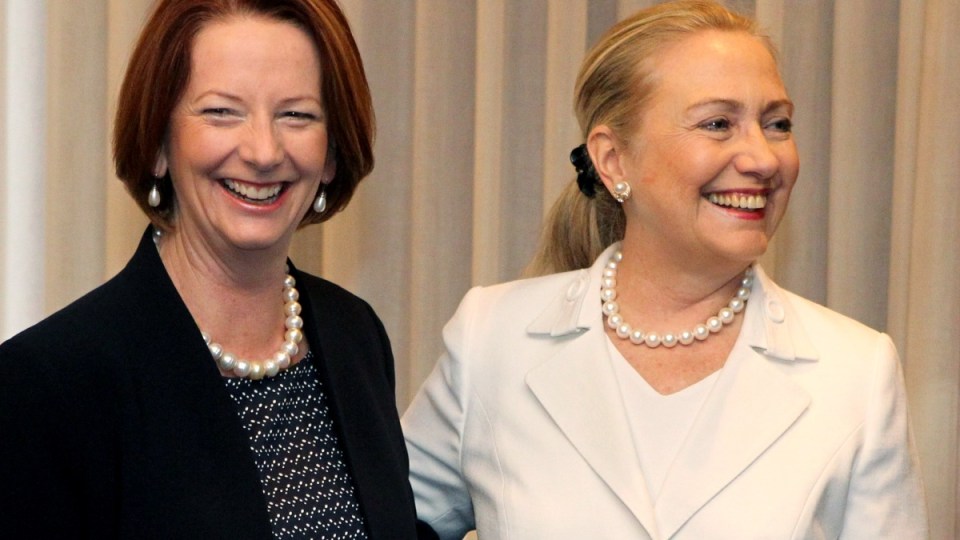 Julia Gillard and world leaders like Hillary Clinton (pictured together in 2012) bonded over a shared pressure to look a certain way. Photo: Getty

Female world leaders often use impromptu meetings in bathrooms on the sidelines of major summits to share their frustrations about the shallow way in which they are being treated, Australia’s first female prime minister says.

In an interview with BBC Radio, Julia Gillard also argued German Chancellor Angela Merkel had actively tried to take attention away from her appearance by adopting something of a “uniform”.

The former Labor leader said she was not alone in lamenting how the media and others focused more on her appearance rather than her policies.

While major summits such as the G20 were dominated by men, female leaders would take opportunities to chat to each other in the relative quiet of the bathroom.

“We’ve all had some complaints over the wash basin,” Ms Gillard told the BBC.

“You would, I mean, often on a trek to the bathroom, or at the hand basins in the bathroom, talk to each other and have a wry smile about some of the ridiculous things that get written about you.”

Ms Gillard cited the experience of Angela Merkel, and argued she had taken steps to draw attention away from her appearance.

“Chancellor Merkel, I think, did a clever thing in deciding she would adopt effectively a uniform.,” Ms Gillard said.

“Every time you see her, she’s wearing the black pants and a coloured jacket. And I think that was actually quite a sophisticated decision to say: ‘Look, I’m going to try and take my clothes out of the equation by effectively looking the same every day’.”

Julia Gillard reveals what female leaders talk about in the bathroom