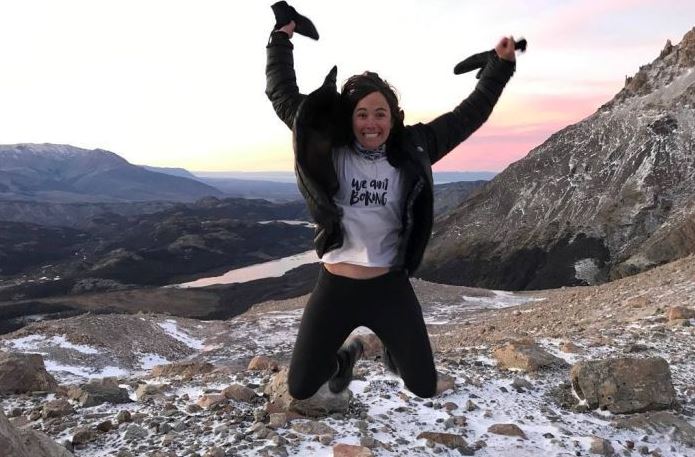 Australian Lucy Barnard jumps for joy after reaching another milestone on her trek from one end of the world to the other. Photo: Facebook

On a remote beach on the Chilean coast, Lucy Barnard is watching the silhouettes of kids playing frisbee against the backdrop of a dusky yellow sky.

“I just reached the Pacific Ocean and I haven’t seen the ocean for maybe nine months,” the 35-year-old Australian says.

Lucy left her homeland almost a year ago to begin, in the truest sense, the journey of a lifetime.

Step by step, she’s hoping to do something no woman in the world has done before.

“I read a book about the first man who walked the length of the world and I just wondered if a woman had done it,” she said.

“When I realised no woman had walked it, I thought, ‘Someone needs to give this a go’. So here I am.”

From southern Argentina to northern Alaska

The former communications manager is 3000 kilometres into her solo adventure from the southern tip of Argentina to the northern edge of Alaska.

Between her starting point of Ushuaia, on the Tierra del Fuego archipelago, to the city of Barrow, in the Arctic Circle, she’s planning to travel across 15 countries and two continents.

“It’s meant to be 30,000 kilometres but with all the to-ing and fro-ing and getting lost and trying to take shortcuts that end up being far longer, I really couldn’t give you a true number,” Ms Barnard said.

There’s just one rule: she can’t use any motorised transport.

The vast majority of the journey is by foot, but several water crossings along the route require a kayak.

For the past 48 weeks, she’s lugged her nearly-30-kilogram backpack through waist-deep snow, over frozen mountains, along stretches of desert, and across wild coastlines and beaches.

“Sometimes it’s really, really hard, and I just want to stay in a town that I’ve fallen in love with, or I want to go home and see my sister’s kids, or my mum,” she says.

“But then other times it’s the most wonderful and wholesome journey, because I meet the most amazing people.

“And I get to sit, like where I’m sitting now, where the sun is setting over the ocean and [there’s] just the most incredible colour palette in front of me.”

No human contact for up to 10 days at a time

Walking from town to town across the wilderness and back roads of South America can be a desperately lonely experience, with no human contact for up to 10 days at a time.

“I had to stop and calm myself down when I saw a group of seven people standing together, because I just needed to talk to someone and have human contact,” Ms Barnard says.

“I just knew if I didn’t calm down, they would think I was crazy.”

At other times, she enjoys heartwarming hospitality from locals, who offer her rides, accommodation, and traditional delicacies like churros (a fried dough pastry).

“Just a few days ago, we were having a heatwave and somebody saw that I was walking along the road, so they went into town – maybe 25 kilometres – and they bought an ice block for me and brought it back,” she recalls.

“Anything kindness-related, people just pulling over to say, ‘Hello, am I OK?’ is incredible.”

Not quite what the doctor ordered

Ms Barnard, who was born in Brisbane and spent several years working in Darwin, took on her epic adventure after a near-death experience two years ago, when her bicycle was hit by a car in the Top End.

As she overcame spinal inflammation and a severe head injury, her doctor suggested her recovery would be improved if she put herself in a learning environment that required lots of decision-making.

Walking the length of the world was probably not what the doctor had in mind, but it certainly meets the criteria of a challenging experience.

“When I’m walking, I’m navigating. I’ve got to be careful that I’m not going to get lost,” she says.

“When I arrive in town I have to fix things that are broken, buy food, write a blog, schedule photos, check in with my family, and then respond to people who want to say hello.”

Onto her fifth pair of boots

Ms Barnard tries to walk between 25 and 35 kilometres per day. That’s around 40,000 footsteps between breakfast and dinner.

“I’m very irritatingly at my fifth pair [of boots], which have failed,” she says.

For safety, she travels with a satellite beacon that can instantly send and receive text messages to and from her family, meteorologists, and her security advisers.

She knows her mission to walk into the record books could take half a decade or more, but for now, she’s taking one step at a time.

“I’ve always said to everyone, ‘I don’t know how far I’m going to get because if I’m not enjoying myself at one moment, and it’s been for some time, then I would definitely stop’.

“But right now I can see myself going for quite some more time.”

Her boots are made for walkin’ – from Argentina to Alaska