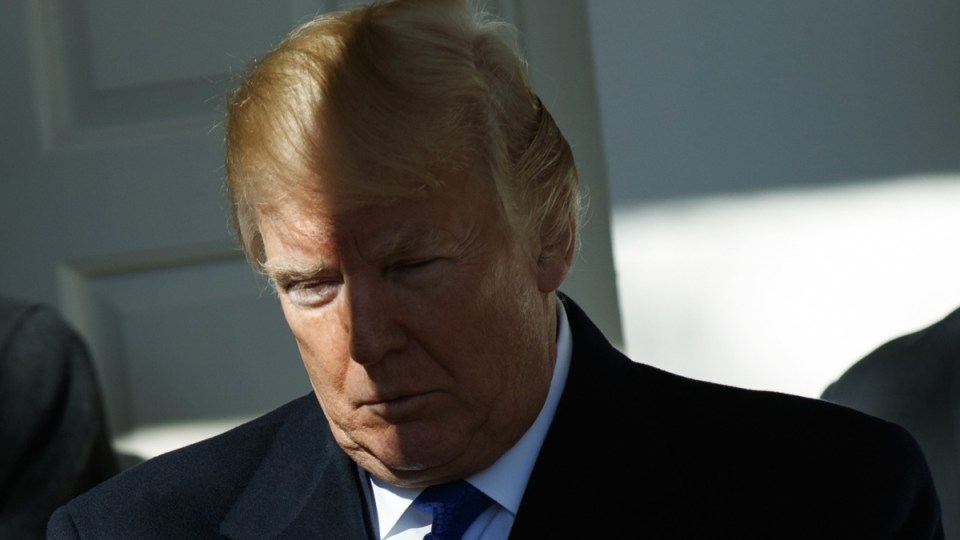 President Donald Trump has slammed a new tell-all book about his time in the White House as “boring and untruthful”, but that hasn’t stopped it selling out across the United States.

Author Michael Wolff’s Fire and Fury: Inside the Trump White House, which he claims is based on more than 200 interviews with administration insiders, went on sale four days early on Friday (US time) in apparent gambit by the publisher to foil efforts by lawyers for Mr Trump to halt its release.

Bookstores in major US cities reported selling out of the initial order almost immediately, with Kramerbrooks in Washington claiming to have sold 75 copies in 25 minutes after it went on the shelves at midnight local time (4pm, Friday AEDT).

“The equivalent I can think of would be Harry Potter,” general manager Lynn Schwartz said.

On Saturday afternoon (AEDT), Mr Trump lashed out at Mr Wolff on Twitter, calling him a “total loser” and also criticising Steve Bannon, Mr Trump’s former Chief Strategist who spoke to Mr Wolff for the book.

“Michael Wolff is a total loser who made up stories in order to sell this really boring and untruthful book,” Mr Trump wrote.

“He used Sloppy Steve Bannon, who cried when he got fired and begged for his job. Now Sloppy Steve has been dumped like a dog by almost everyone. Too bad!”

Michael Wolff is a total loser who made up stories in order to sell this really boring and untruthful book. He used Sloppy Steve Bannon, who cried when he got fired and begged for his job. Now Sloppy Steve has been dumped like a dog by almost everyone. Too bad! https://t.co/mEeUhk5ZV9

On Thursday, the President also claimed he “never spoke” to Mr Wolff, a contributing editor at The Hollywood Reporter, but Mr Wolff countered that he “absolutely” spoke with Mr Trump.

“Whether he realised it was an interview or not, I don’t know, but it was certainly not off the record,” Mr Wolff said.

Questions have been raised as to the veracity of Mr Wolff’s claims, with some journalists weighing in to fact-check certain recollections and others pointing out the book’s main source appears to be Mr Bannon, raising issues of bias.

“I believe parts of it, and then there are other parts of it that are factually wrong,” New York Times reporter Maggie Haberman told CNN.

But since the book hit stands in the US – it will be available on Amazon Australia from January 19 – even more revelations have been unearthed. Here are some of the most interesting, based on excerpts provided to US media.

His ‘perplexing’ marriage to Melania

Mr Wolff alleges Mr Trump and his wife Melania spent “relatively little time together” and their marriage was “perplexing to almost everybody around him”.

According to Mr Wolff, Mr Trump was known to boast about his third wife’s looks in front of others, calling her his “trophy wife” without irony.

The book also suggested those in Mr Trump’s inner circle believed he was responsible for the leaking of nude photos of Mrs Trump to the New York Post in 2016.

While accusing Mr Trump of being an “absent father”, he claims Mr Trump had uncovered the secret to a happy marriage.

“While he may not have quite shared his life with her, he gladly shared the spoils of it,” he writes, adding that the former Celebrity Apprentice host’s marriage mottos included, “Do your own thing,” and, “Happy wife, happy life”.

His ‘fundamental’ need to be liked

The author says Mr Trump’s driving force is a deep desire to be liked.

“He was ever uncomprehending about why everyone did not like him, or why it should be so difficult to get everyone to like him,” he writes in the book.

A former White House deputy chief of staff agrees: “He just fundamentally needs to be liked so badly that … everything is a struggle for him.”

He trusts women more than men

“Women, according to Trump, were simply more loyal and trustworthy than men,” Mr Wolff writes.

Mr Trump was widely criticised for failing to condemn neo-Nazi and far-right protests in Charlottesville, Virginia, in August 2017, but Mr Wolff contends Mr Trump was not entirely sure what he’d done wrong.

According to Mr Wolff, Mr Trump was intent on filling the White House with his family members, depsite advice to the contrary.

Media personality Ann Coulter allegedly told Mr Trump: “Nobody is apparently telling you this. But you can’t. You just can’t hire your children.”

Regardless, Mr Trump’s eldest daughter Ivanka, a senior advisor to her father, was apparently integral to his administration’s widely praised missile strike against a Syrian air base after a suspected chemical weapons attack last year.

In order to convey the severity of the situation, Ivanka – who Mr Wolff claims has her own aspirations to be president – showed her father a slideshow of photos taken after the attack.

“He seemed mesmerised,” Mr Wolff writes, quoting Mr Bannon, who supported the isolationism that had been a feature of his campaign speeches.

“Bannon saw Trumpism melting before his eyes … After seeing all the horrifying photos he immediately adopted a completely conventional point of view: it seemed inconceivable to him that we could not do something.”

“If it was print, it might as well not exist.

“Some believed for all practical purposes he was no more than semiliterate … But not only didn’t he read, he didn’t listen. He preferred to be the person talking … What’s more he had an extremely short attention span.”

Fire and Fury: Revelations from the book Trump calls ‘boring and untruthful’