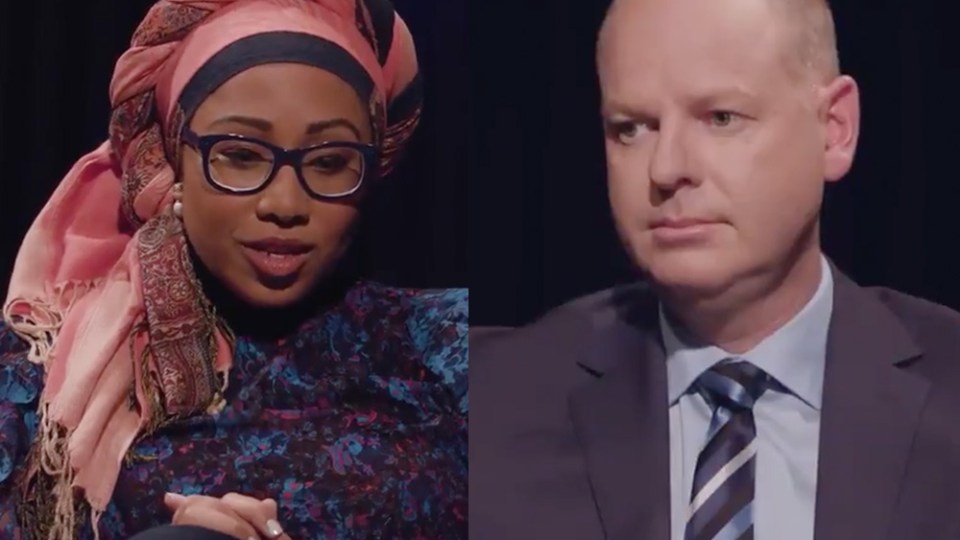 "Do you ever feel bad wearing a hat inside?" Tom Gleeson asked Yassmin Abdel-Magied on Hard Chat. Photo: ABC

Former ABC commentator and controversial activist Yassmin Abdel-Magied has poked fun at her tumultuous year in the spotlight in an interview with comedian Tom Gleeson for his Hard Chat segment.

As usual, Gleeson didn’t pull any punches in the satirical sit-down, which aired on ABC’s The Yearly on Wednesday night, asking Abdel-Magied: “Do you think that every ANZAC Day we should have a minute’s silence for your career?”

The 26-year-old writer incited outrage this year when shared a ‘Lest We Forget’ post on social media on ANZAC Day, but in reference to human rights crises on Manus Island, in Syria and in Palestine, amongst others.

While the Sudan-born Abdel-Magied retracted the post after she was accused of disrespecting the diggers’ memory, she later shared a similar sentiment on Remembrance Day.

“Was that just attention-seeking?” Gleeson asked of the Remembrance Day post.

“You know, I missed all the death threats … it gives you a sense of importance,” responded Abdel-Magied, whose ABC show Australia Wide was cancelled shortly after the ANZAC Day incident, for unrelated reasons.

She then proceeded to joke about visiting the war memorial in Canberra next year in order to really rile people up, but worried “no one will notice me”.

“Why not? You look like a tourist,” was Gleeson’s risky reply.

Gleeson continued to pepper Abdel-Magied, who is of Msulim faith, with intentionally ignorant questions like: “Do you ever feel bad about wearing a hat indoors?”.

“When you’re in London, do you ever hang out with Rolf Harris so you’re not the most-hated Australian in the room?” Gleeson asked.

Abdel-Magied was seemingly unbothered about being aligned with Harris, bursting into laughter and joking: “Rolf and I go to the pub quite regularly together … we’re quite the hit”.

Gleeson’s line of questioning also included whether Abdel-Magied planned on releasing a second memoir (“Yassmin’s Story 2.0: The Clusterf—,” she suggested) and why she kept coming back to the country that had criticised her so heavily.

“What are you doing here? You should leave,” Gleeson suggested.

“I’ve been told to leave a number of times,” Abdel-Magied said in response.

Gleeson decided to end the interview with one more reference to Abdel-Magied’s ANZAC scandal.

“Sorry I forgot to ask, would you like an ANZAC biscuit? They’re halal,” he asked.

“Are they really? Pauline Hanson would be pretty upset about that,” Abdel-Magied shot back.

Speaking to The New Daily, Gleeson said he initially wanted to interview Abdel-Magied immediately after the ANZAC Day furore occurred.

“[But] the controversy was descending upon her and I think her management decided it would make it worse,” Gleeson explained.

“At the time I thought it was perfect because I could pay her out to her face … It’s a comedy intervention, because it restores your image.”

Although he conceded Abdel-Magied seemed “a bit nervous” ahead of their chat, Gleeson said her decision to appear on the segment appeared to be paying off.

“Most people [on social media] are saying she must be a true Aussie because she can laugh at herself,” he said.

“Plus she went up against such a s–tstorm on ANZAC Day that anything I could say to her couldn’t really hurt her.”

The seasoned host said that, in person, Abdel-Magied was nothing like the villain the media had made her out to be.

“I think people forget she’s 26 and did a silly Facebook update,” Gleeson said.

“So many 26-year-olds do that. I felt sorry for her because she’s just a bit young and did a stupid thing.”

Yassmin Abdel-Magied has a controversial Hard Chat with Tom Gleeson