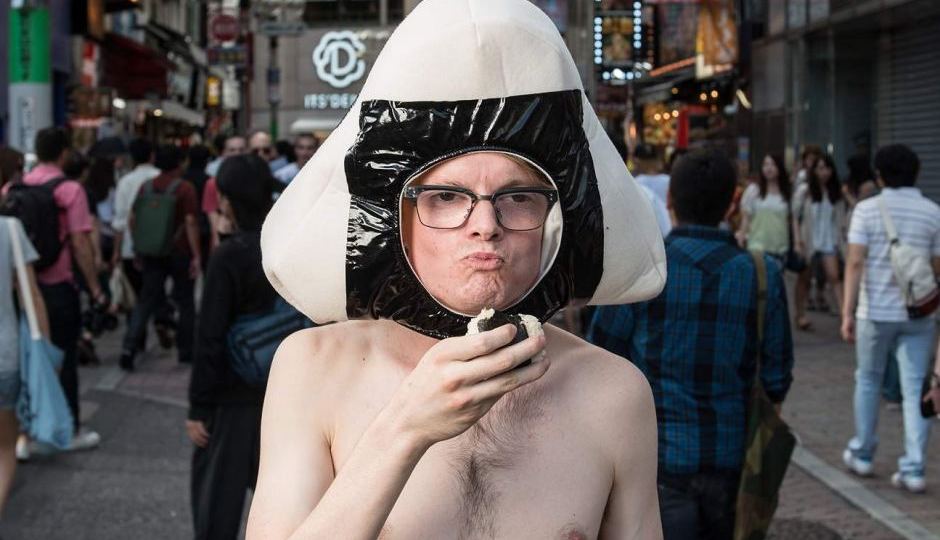 David Elliot-Jones as his Onigiri Man character in Tokyo. Photo: Big In Japan/ABC

And this might be exactly what rockets him to stardom in Japan.

A few years ago David hopped on a plane with a mission: to become famous by any means necessary, and find out why there is such a huge market for foreigners making it “big in Japan”.

“I stumbled across these videos of foreigners who were clearly big names over there but we hadn’t heard of them,” he told ABC.

With the help of two filmmaker friends, David has just released a documentary of his experience — Big In Japan — and reveals exactly how far he pushed it to become a foreign sensation.

Step one: Join an agency

David knew he had stumbled onto something big, but it wasn’t until he arrived in Tokyo that the scale of it emerged.

“We found all of these foreign talent agencies, which basically serve as agents,” he said.

The term “big in Japan” was popularised in the 1980s and refers to the phenomenon of Westerners finding enormous fame and fortune over there — often for doing outlandish things — while remaining anonymous back home.

After getting some professional photos taken and registering with an agency, David put the feelers out to see if he could tap into this market.

This meant seeking roles as an extra in TV shows and films, or as the star of an ad.

“We found that it was quite easy because I had a particular look, I looked quite nerdy,” he said.

“Once we cottoned on to that we ran with it a bit and made me into a super nerd.”

With David in front of the camera, it was time for his friends and fellow documentary makers Lachlan McLeod and Louis Dai to swing into action.

They crafted ever-more-outrageous characters for David, like Mr Jonesu and Onigiri Man, and shot professional videos with interesting narratives.

They invested in Japanese lessons for David and even paid for their scripts to be professionally translated.

It turned out to be overkill.

“When we met all these other foreigners in Japan who did have millions of subscribers, they were basically vloggers,” David said.

“They were people whose videos didn’t have narratives, they were just showing people a window into their lives in Japan.

“So it showed us that that whole approach was not necessary at all.”

Step three: Learn from the pros

Bob ‘The Beast’ Sapp is the poster boy for foreigners who have made it in Japan.

For 14 years, the 156kg strong man has cultivated millions of followers with his self-described “big and dumb” persona. He rakes in millions of dollars a year.

“Literally every person knows who he is,” Lachlan said.

“It was really cool because the whole point was to get advice from people who had done it.”

From The Beast they learned what it took to maintain the fame. But from Rick ‘Ladybeard’ Magarey, they learnt how to build a following — and fast.

While David had managed to gain a few hundred followers online in the first few months, Ladybeard — a crossdressing, heavy metal singing wrestler from Australia — blew them out of the water.

Step four: Get on TV

With a geeky persona nailed down and some interesting side characters developed, David started to find some success.

He landed some roles as a TV extra and then managed to get in advertisements, and finally hit the big time with a star appearance in two Toyota ads.

Soon, people were approaching him. And such was his success he even started to get fan art.

“What it took was actually quite extreme and involved, in probably the most extreme case, me donning just a little loin cloth and a rice ball head,” David said of his cultivation of fame.

“I did whatever it took.”

After spending a year chasing stardom, David came to realise something.

“With fame we tend to look at it as either something we want or we don’t want,” he said.

“But we found it was a lot more nuanced than that, and it’s an extension of something quite human.”

In truth, David’s quest to become famous was a social experiment and a chance to explore what fame looked like in the social media age.

But for Rick Magarey and Bob Sapp it has far more profound meaning and consequence.

“I sort of need to get famous, because I’m never going to feel worthwhile if I don’t,” Magarey told the documentary markers.

“They no longer see me as a human being, they see me as the character of The Beast,” Sapp said.

The documentary makers learnt that just because someone is beloved, it doesn’t mean everything comes easily.

And while social media could be a great vehicle for building a profile, Lachlan said it could also become a “dubious entertainment black hole”.

“So where do we draw the line between entertainment versus voyeurism, intimacy versus over-sharing and belonging versus being detached from reality?” Lachlan asks.

“In a digital culture motivated by likes and mass approval, it is important to grapple with the big questions, to be realistic about the costs of fame, and not to lose sight of what’s real and important.”

Meet the Australian chasing fame in Japan – by any means necessary