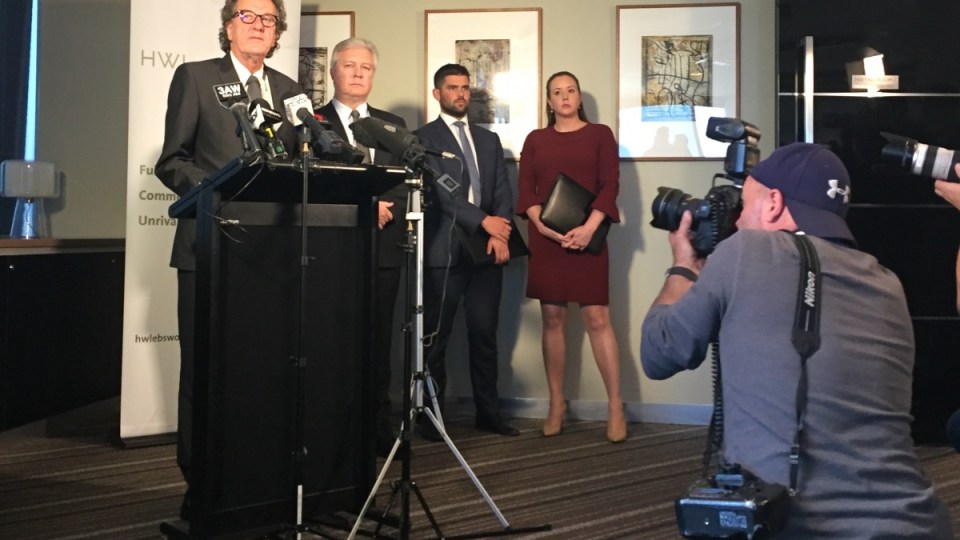 An emotional announces his defamation action at a 2017 press briefing. Photo: TND

Reading from a prepared statement at his lawyer’s office, Rush told a packed press conference on Friday that he had filed defamation proceedings against the paper, which published a story about the claims.

“It is an action I am taking in order to redress the slurs, innuendo and hyperbole they have created around my standing in the entertainment industry and greater community,” Rush said.

“The Daily Telegraph has made false, pejorative and demeaning claims – splattering them with unrelenting bombast on its front pages.

“This has created irreparable damage to my reputation, been extremely hurtful to my wife, my daughter and my son; to my extended family – and to many colleagues in the film, television and theatre industry.

Rush said the “situation is intolerable and I must now seek vindication of my good name through the courts”.

His lawyer, Nicholas Pullen of HWL Ebsworth Lawyers, said the proceedings were only filed on Friday.

“We don’t have our have a trial date yet, this has only been set up this afternoon.

“They were only filed today and I think this is the first that The Daily Telegraph has heard of this.

“This is an action against only The Daily Telegraph,” he said. “Anything else is not pertinent to the purpose of this conference.”

Responding to a question, Mr Pullen also confirmed there was no action against the Sydney Theatre Company at this time.

“It is in the interest of Geoffrey Rush and myself, lawyer Nicholas Pullen to clear his name. So soon as possible.”

Rush said he would not be answering any further questions beyond his statement made to a packed room of journalists and flashing cameras at his lawyers office on Collins Street.

One reporter asked if Rush had sought a retraction or apology from The Daily Telegraph. The question was not answered.

The Daily Telegraph’s editor Christopher Dore said: “The Daily Telegraph accurately reported the Sydney Theatre Company received a complaint alleging that Mr Geoffrey Rush had engaged in inappropriate behaviour. We will defend our position in court.”

Rush later announced he was stepping down as president of the Australian Academy of Cinema and Television Arts (AACTA) ahead of the academy’s annual awards last week.

Rush said in a statement to The Associated Press he was stepping down “effective immediately and until these issues have been resolved”.