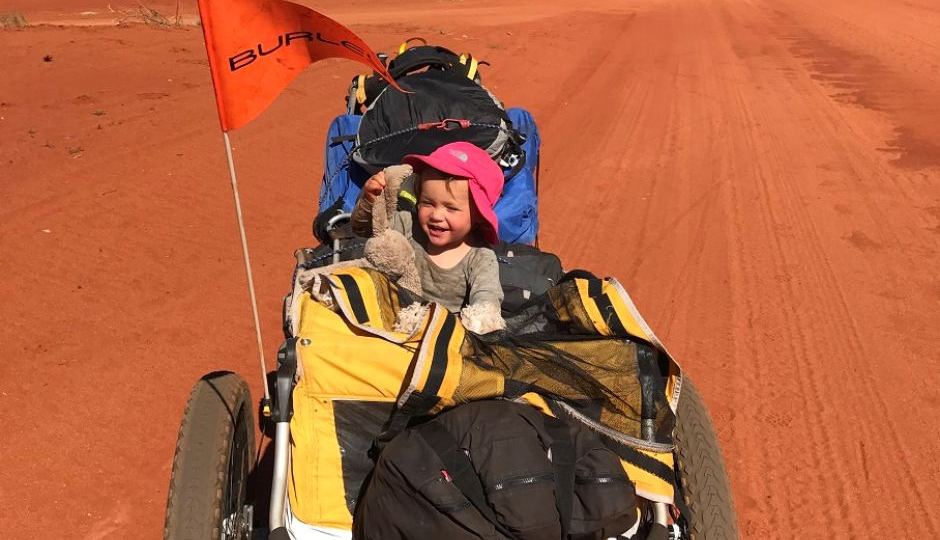 The Jones family spent more than 100 days on the road from NT to SA. Photo: ABC/Lauren and Justin Jones

Raising a toddler can be hard at the best of times, but taking a one-year-old on a 1800km hike across the outback presents a whole new parenting challenge.

Lauren and Justin Jones have returned to their Sydney home after spending 102 days on foot with their now 18-month-old daughter, Morgan.

The couple set off from Dockers River in the Northern Territory in July and ended their journey at Port Augusta in South Australia.

“We did this for two reasons,” Mrs Jones said.

“We wanted to raise a strong, independent child who loves nature, and to show that life doesn’t have to end once you become parents.

“I think it’s easy to put your dreams on hold when you have children, but we want other parents to know you can still have fun.”

The Jones’s endured temperatures ranging from zero to 42 degrees, and battled severe thunderstorms and flash flooding.

They received six food drops on their marathon trip, and survived on a basic diet of healthy freeze-dried vegetables.

Morgan was pulled along in a custom-built buggy, while her parents walked by foot for an average of seven hours a day.

“It took a lot of adjusting but Morgan got used to roughing it quicker than we did,” Mr Jones said.

“She learned that making toast required collecting sticks and lighting a fire.

“She also learnt not to touch snakes and how to dress appropriately when it’s stinking hot or freezing – these lessons aren’t taught to kids in the family home.

“One of the highlights was that Morgan actually took her first few steps while we were trekking through remote Australia, so that was pretty special.”

Lauren and Justin documented their unique experiences in the outback on Instagram, with many photos capturing barren Australian outback.

But taking on nature is nothing new for Justin, who has kayaked from Australia to New Zealand, and traversed the coast to the pole in Antarctica.

“These things are always challenging, but this time was a bit different because I was with my family for the whole time and that was great,” Mr Jones said.

“But families come with a lot of stuff you know – the cart we pulled weighed 270kg at one stage and I actually lost 19kg in a four-month walk.

The Jones’s only returned home to North Bondi a few weeks ago and they are still adjusting to reality.

“The parenting challenges are really different – in the outback, we had to watch for snakes, here it’s cars and the dangerous surf,” Mrs Jones said.

“But our main goal was teaching Morgan confidence and now, as a toddler, she’s much more resilient to the small things that affect toddlers.

“So now when she falls over, she just gets up and dusts herself off – it’s nice to see how much she’s changed and grown over time.”

Meet the toddler who trekked 1800 kilometres across the outback