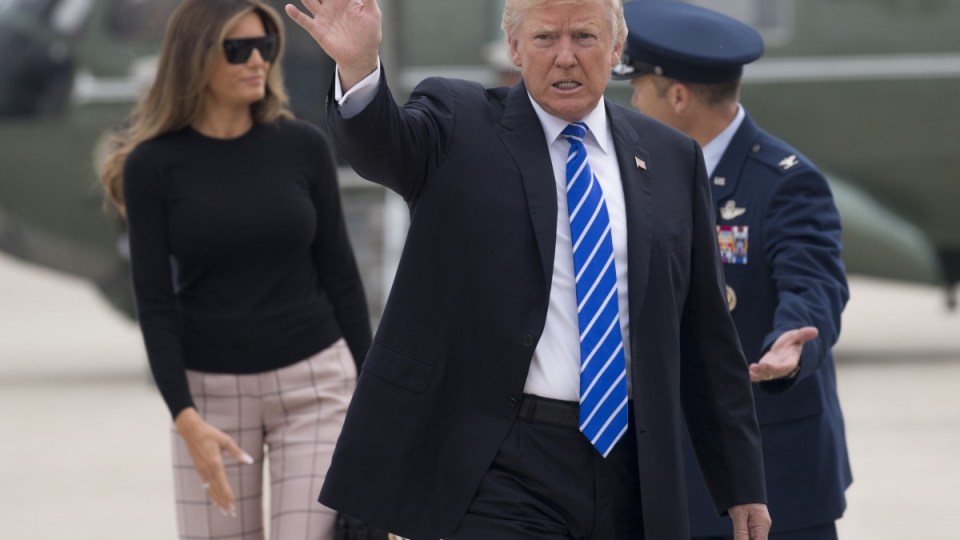 She famously snubbed her husband’s attempts at hand-holding, but it appears Melania Trump has now received a taste of her own medicine while accompanying Donald Trump on his trip to Germany for the G20.

The First Couple touched down in Warsaw, Poland, on Wednesday night ahead of the Summit, which will kick off in Hamburg, Germany, on Friday.

This marks the Trumps’ second trip overseas since his inauguration as US President in January, 2017. Their first took place in May this year, when Mrs Trump was memorably caught out swatting Mr Trump’s hand away.

Now, video footage of the couple boarding Air Force One in Washington suggests further frostiness between the pair.

After disembarking from Marine One, Mr and Mrs Trump make their way across the tarmac to the presidential plane, with Mr Trump walking well ahead of his wife of 17 years.

When he reaches the steps of Air Force One, he begins to climb them without waiting for Mrs Trump.

Possibly realising the error of his ways, Mr Trump momentarily turns back to the First Lady and offers her his hand before dropping it again and continuing his march up the stairs.

Those on social media were quick to notice the lack of physical contact between the pair, with some deeming their interactions “emotionally awkward”, while others remarked on their ongoing refusal to hold hands.

“The distance between them is so damning,” one Twitter observer noted.

But Mrs Trump, who was clad in $US1790 ($A2355) Valentino pants, Manolo Blahnik heels and toting a luxury Hermès Birkin bag, seemed unfazed by the snub.

Perhaps because it’s not the first time the President has exhibited questionable etiquette in relation to his wife.

Mr Trump’s propensity to walk ahead of his wife has drawn comparisons to the body language of his predecessors like Barack Obama, who traditionally walked hand-in-hand with his wife Michelle.

Compare and contrast with this photo—and there are many others on the web that show the same thing. pic.twitter.com/ZbzW02Nnbg

Touching down in Warsaw, Mr and Mrs Trump continued to keep their distance, while Mr Trump’s daughter Ivanka and her husband Jared Kushner stayed close together.

The First Lady will have home-ground advantage on at least one of their upcoming airport photo opportunities after Slovenian President Borut Pahor confirmed the Trumps have accepted the invitation of a state visit to Mrs Trumps country of birth.

“The Presidents did not set any dates or an exact opportunity when the visit would take place,” Slovenian presidential spokesman Sepla Vovk said Friday morning (AEST).

Mrs Trump was born in Novo Mesto, Slovenia before embarking on an international modelling career.