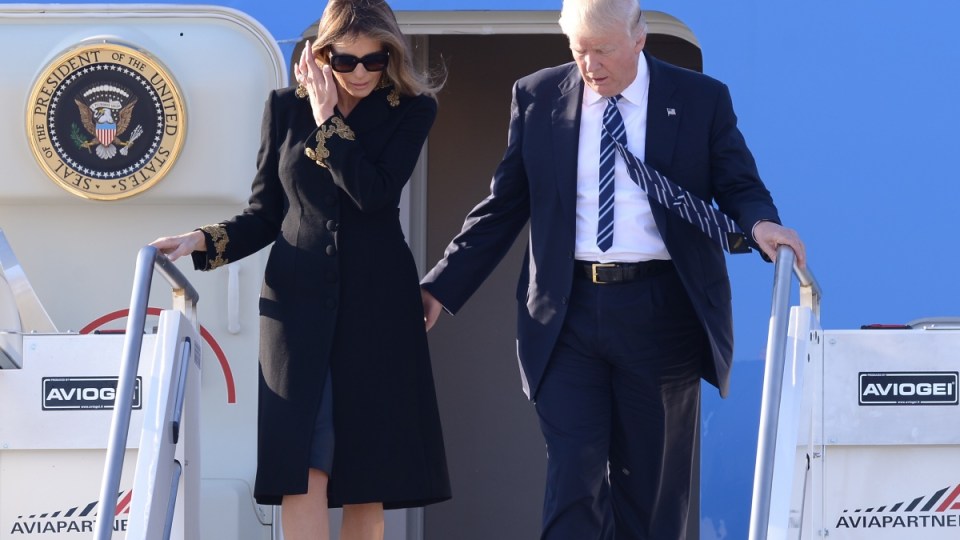 The moment Melania Trump rejected her husband for the second time. Photo: Getty

One day after footage of Melania Trump swatting her husband’s hand away went viral, the First Lady of the United States has once again been caught rebuffing President Donald Trump’s attempt to connect.

Shortly after Air Force One touched down in Rome, Italy, on Wednesday (AEST time), all eyes were on President Trump and his wife of 12 years as they exited the plane, waving to waiting crowds.

But when Mr Trump reached for his wife’s hand she expertly evaded his touch by quickly moving to fix her hair.

See the moment below

Of course, it could simply be that windy conditions resulted in Mrs Trump’s deft hair fixing, but recent events have suggested the First Lady may be intentionally avoiding her husband’s clutches.

A day earlier Mrs Trump made headlines when she executed a similar manoeuvre upon arrival into Tel Aviv, Israel.

Walking across the tarmac at the Ben-Gurion International Airport on Tuesday, Mr Trump reached for Mrs Trump’s hand but she swatted it away.

However, the pair were later photographed happily holding hands before flying out of Tel Aviv.

The Trumps are in the middle of a five-day tour through Saudi Arabia, Israel, Belgium and Italy – their first overseas trip together as President and First Lady.

"She Hates Me" by Puddle of Mudd (2001), featuring Donald and Melania Trump pic.twitter.com/iMnepQo2Ey

Mrs Trump’s relationship with her husband has been the subject of scrutiny since May, when her official Twitter account liked a tweet featuring a clip of her scowling at her husband during his inauguration.

Her communications director denied Mrs Trump liked the tweet, saying: “The First Lady wasn’t aware of any of this until I brought it to her attention. It isn’t her primary account and we have since changed the passwords.”

Mr Souza shared a photo to his Instagram account of the former First Couple with their hands firmly entwined.