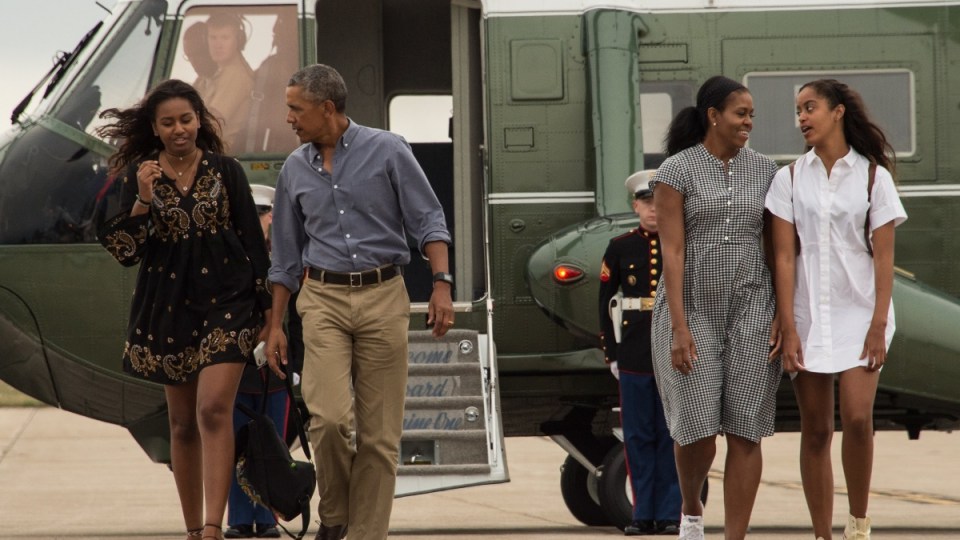 From left: Sasha, Barack, Michelle and Malia Obama haven't been able to steer clear of the spotlight. Photo: Getty

If former United States president Barack Obama was hoping for a peaceful retirement, he’s in for a rude awakening.

The public fascination with Mr Obama, his wife Michelle, and their two daughters Malia and Sasha, has intensified following the conclusion of his two terms as president in January this year.

While the attention centred on the former First Couple has been overwhelmingly positive – from articles celebrating their off-duty style to joyous holiday photos – his teenage daughters have been the targets of considerable criticism from right-wing media.

Eighteen-year-old Malia in particular has had her antics scrutinised by conservative commentators like The Gateway Pundit‘s Lucian B Wintrich, who labelled her a “privileged party girl” after encountering her at a New York nightclub.

Mr Wintrich accused Malia of screaming at him and threatening him after he began photographing her without her consent.

According to Mr Wintrich, he was later removed from the venue by Malia’s security team.

Malia Obama just scolded me at a club NYC. Not joking. She started saying "I wanna punch that dude I the face!"

This wasn’t the first time Malia, who is currently undertaking a gap year, was photographed against her will, with photos of her drinking underage and attending a music festival being circulated online earlier this year.

The teenager has also been tailed by paparazzi while out with friends and had her love life analysed by the tabloids.

Younger sister Sasha, 15, has managed to avoid the bulk of criticism, but was captured by photographers enjoying a January beach holiday in Miami surrounded by a full security detail – a lingering consequence of her father’s high profile.

Meanwhile, it’s Mr and Mrs Obama’s post-presidency fashion choices that have earned them the most attention from the general public.

This week, photos of Mrs Obama sporting her natural hair went viral on social media as people celebrated the more relaxed look, which was a stark contrast to the picture-perfect blow dries she wore throughout Mr Obama’s time in office.

This is the picuture I have been waiting on for like 3 years. COME ON NATURAL. pic.twitter.com/HF8AYpsciB

Mr Obama, who is currently residing on a small island in French Polynesia while writing his memoir, has been photographed wearing a backwards cap, golfing in Hawaii and jet skiing off Richard Branson’s private island.

Obama's on vacation with the hat backwards. He's never coming back. pic.twitter.com/RUakcwwgtT

One particular photo of the former president in a leather jacket set the internet on fire, with social media users labelling his relaxed style the “cool dad” look.

President Barack Obama out here living his best life and looking like the next cover of GQ pic.twitter.com/PeD5aUaz9P

Keeping up with the Obamas: the media’s twisted obsession