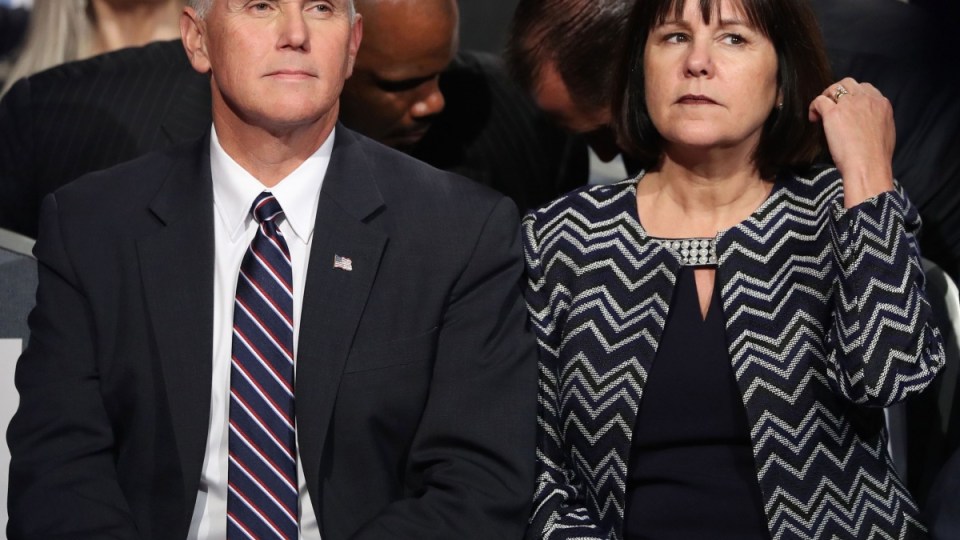 Mike Pence emphasises the importance of "building a zone" around his marriage. Photo: Getty

United States Vice President Mike Pence is under scrutiny after a newspaper profile revealed the unconventional nature of his marriage to wife of 32 years, Karen Pence.

Social media exploded after a March 28 profile piece in The Washington Post revealed Mr Pence, 57, “never eats alone with a woman other than his wife and that he won’t attend events featuring alcohol without her by his side, either”.

The original quote came from a 2002 interview with The Hill, in which Mr Pence spoke about “building a zone” around his marriage.

Reaction to the Post profile was swift and divided, with many calling Mr Pence “sexist” for refusing to meet with women alone and criticising his reliance on his wife.

Others questioned his motivation for having the unusual rules in place, with actress Bette Midler joking on Twitter: “Mike Pence won’t dine with a woman without his wife b/c he doesn’t trust himself or b/c he thinks his wife will run away while he’s out?”

Some, however, praised the Pences’ close relationship.

“Trying to understand why people are upset that Mike Pence respects his wife? Mutually agreed upon marital boundaries are a good thing,” one Twitter user commented.

Refusing to partake in certain activities without your spouse is actually quite common amongst evangelical Christians and is commonly referred to as “The Billy Graham Rule”, after the prominent 1950s evangelist who first adopted the practice.

This is the second time the Vice President’s marriage has caught the public’s attention.

The first occurred in January this year when a Rolling Stone article claimed he referred to Karen, 60, as “mother” at a dinner party during his time as governor of Indiana.

The Pences, both evangelical Christians, married in 1985 and have a close bond, with the Post describing Mrs Pence as her husband’s “prayer warrior” and “gut check and shield”.

Mrs Pence accompanies the VP on most of his official duties and is an avid supporter of Donald Trump, yet claims one of her “hard and fast rules” is refusing to talk policy, instead choosing to be a “listening ear”.

However, Mrs Pence has always had a direct line to her husband, with Mr Pence keeping an antique red phone on his desk throughout his time as governor, the number for which only his wife knows.

According to Vicki Lake, a friend of the family who spoke to the Post, Mrs Pence is a “godly mother and wife”.

“[When] Mike was a congressman, Karen would send out prayer requests to people — to pray for them as a family, that God would give them the strength to do all that they had to do,” Mrs Lake said.

President Trump also values Mrs Pence’s opinion and reportedly personally apologised to her, as well as Mr Pence, after audio footage emerged of him making sexist remarks about women in 2005.

Together, Mike and Karen Pence have three children: Michael, 24, Audrey, 21, and Charlotte, 22. Michael is in the Marine Corps, while Charlotte is an aspiring filmmaker and Audrey a university student.