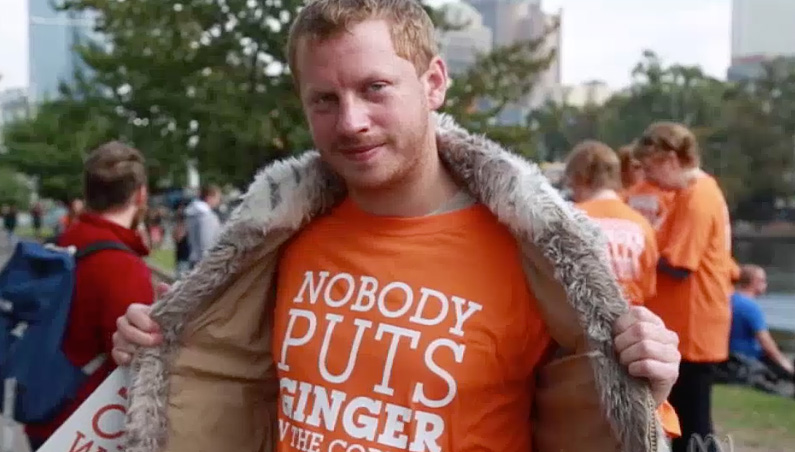 Not everyone is worried about being a redhead. Photo: ABC

TV doctor Andrew Rochford has given an intemperate, online dressing down to the schoolyard bullies picking on his son Archie, who has red hair.

The 10-year-old may have a red face as well, given that Rochford senior included a pensive portrait of his son in the blistering Instagram post that has since been relayed in a spray of media reports.

The term ‘ranga’ for redheaded people is derived from orangutan, the tree-dwelling ginger-furred primate.

“To ALL who think it’s ‘funny’ to discriminate and bully someone for something they CANNOT change (hair colour) … you are no better than a racist or a homophobe,” posted the radio host and TV personality.

“You are as shallow and ignorant and PATHETIC as all the other narrow-minded bigots that inhabit our beautiful planet. So take a really long hard look at yourself…”

The media reports also quote an online piece by Channel Nine personality Leila McKinnon, in which she suggests the word ranga – a label that former PM Julia Gillard accepted with good grace – be ditched from common usage. There are a number of issues here that need to be picked apart.

Might Dr Rochford have been better off talking to Archie’s school before going public? Social media is an effective pulpit for getting it known that you’re upset, but it doesn’t tackle what’s going on at close quarters, the actual problem.

Is this a red-hair issue? Redheads, at two per cent of the population, stick out like musk sticks in a bowl of peppermints – and anyone looking different from the fold is fodder for idiots.

Psychologist Lyn Bender told The New Daily: “This is a bullying issue. Sure, some redhead kids get bullied. So do fat kids and kids with sticking-out ears. Whatever aspect is being latched on to … it’s about spotting a vulnerable kid and piling on.”

Jacky Colliss Harvey, author of Red: A History of the Redhead – and a ‘gingernut’ to boot – didn’t cop any nastiness when she was a child, but is aware that others did, noting that boys tend to fare worse than girls.

As she told the Boston Globe: “Have red-haired, white-skinned people suffered to the same degree that people whose skin is black have suffered over the centuries from oppression, prejudice, and stigmatisation? No.” “But the experience of one child being bullied at school? I don’t think you can choose which person’s experience is more miserable based on the particular stereotype that they are being victimised for.”

However, Ms Bender noted we live in a culture where the tall, dark and handsome are celebrated, and where those of pale, freckled skin are not held up as an ideal of beauty.

So what about the word ranga? Aaron Webb is co-founder of R.A.N.G.A (Red And Nearly Ginger Association), Australia’s “peak special interest organisation for red hair”.

Mr Webb, a boilermaker, tells his fellow carrot-tops to embrace any stupid nickname thrown at them.

“We take anything negative and turn it into a positive.”

A R.A.N.G.A pride march is happening in Melbourne on April 29. Check out ranga.net.au.