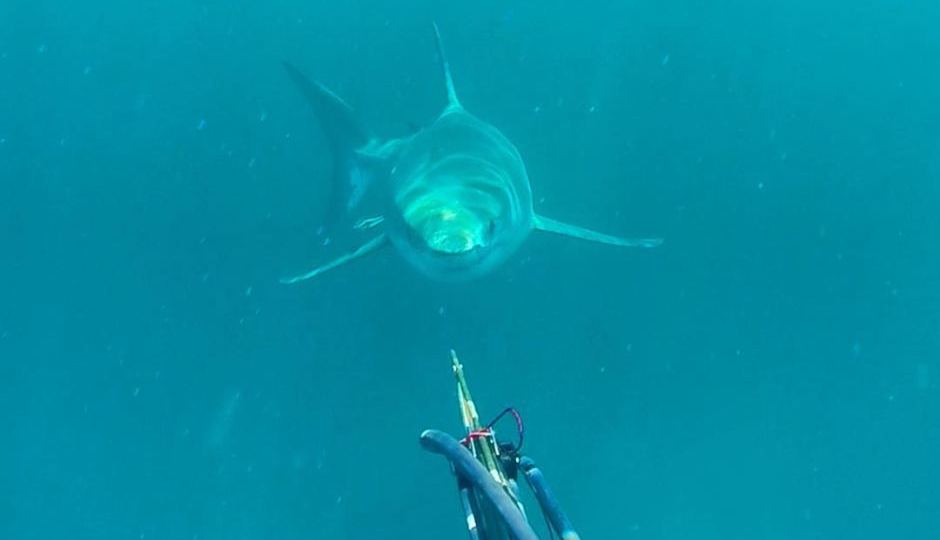 A diver has recalled looking into the eyes of a great white shark that came within touching distance in waters off Queensland’s Moreton Island.

Brett Levingston said he first saw the shark, which was about four metres long, when it was swimming directly at him.

“I got my spear gun, which wasn’t loaded, and gave it a good poke in the head because it wasn’t changing its course at all, it was coming straight at me,” he said.

Mr Levingston, from the Gold Coast, said jabbing the shark with the gun managed to make it change direction.

“Looking into its eyes and its mouth was open an inch. I won’t be forgetting that for a while,” he said.

“When I jabbed it, it felt like hitting a brick wall.

“When I did that I saw its eye roll back into its head, that was pretty cool, I have seen that in all the movies.”

Mr Levingston said the shark swam past peacefully at first but as he swam towards his boat it circled below him.

“I knew that wasn’t good, so I sped up a bit and met up with the guys,” he said.

“We decided to move spots.”

Mr Levingston said he and his diving friends were shocked at what they had seen when they got back in their boat.

“We were all screaming, we were all just more stoked that we had seen it,” he said.

However Mr Levingston said he would not try to get that close to a great white shark again.

“If it does happen again I hope it is exactly the same way because the shark was very relaxed, I was not so relaxed I was screaming,” he said.

“I’m glad I saw it, it was a very unforgettable moment.”