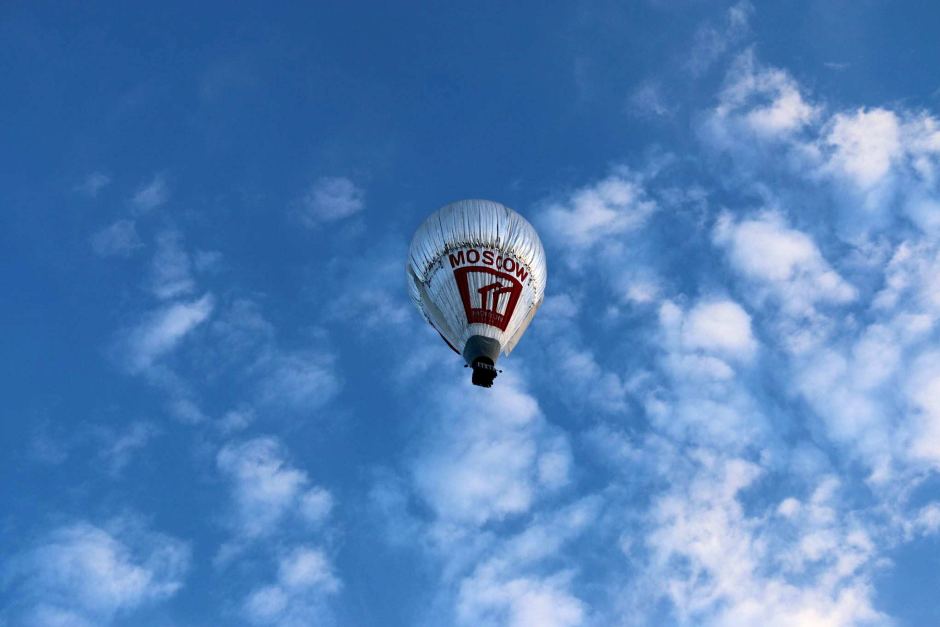 A Russian adventurer has lifted off from Western Australia’s Avon Valley in a daring bid to break the world record for a solo hot air balloon flight around the globe.

Fedor Konyukhov took off from Northam, 96 kilometres north-east of Perth, at 7:45am (WST), from the exact spot where American aviator Steve Fossett launched the only previous successful solo circumnavigation of the world in a hot air balloon.

The flight path for his trip goes over Australia, the Tasman Sea, New Zealand, the Pacific Ocean, South America (Chile and Argentina), the Atlantic Ocean, South Africa and the Indian Ocean, before ending back in Australia.

“He just said goodbye, he was waving, he started to climb nicely and when we met him at 10,000 feet, he just keep flying with oxygen mask … enjoying the flight, enjoying the sunrise,” he said.

“He said ‘Australia’s beautiful from above!’ … I asked him what’s the feeling, he said ‘very very nice’.”

Mr Konyukhov’s team began filling his balloon with helium about midnight in preparation for the launch, after about 30 volunteers from Northam helped lay it out on Monday.

There was a minor setback when a small hole was found in the canvas of the balloon in the early hours of Tuesday, but it was quickly repaired and the launch went off without a hitch.

“It’s a huge relief because we been working for two years non-stop, and it would be catastrophic to see something fall off or the balloon is not rightly built or we were wrong with the calculations,” Oscar Konyukhov said.

Mr Konyukhov had arrived in WA in early June, with a cargo delay and a string of unfavourable weather delaying the world record bid.

Fellow adventurer and friend Dick Smith said the trip would be risky, but he believed the Russian could do it.

“I’ve flown across Australia and across the Tasman sea in a similar Roziere balloon, and you’re virtually completely out of control,” he said.

“No one can predict what the weather is going to be like … Steve Fossett ended up right down just on the edge of Antarctica, which is incredibly dangerous, because in winter time it’s 24 hours darkness. You can’t be rescued there easily.

“But if he ends up north he can end up in a great big circle, and so halfway across the Pacific Ocean [he could] just stay there. And that’s no good.

Mr Konyukhov will be confined to a pod not much bigger than himself in the balloon’s gondola during the attempted 33,000-kilometre flight.

Mr Konyukhov has previously climbed Mount Everest, sailed around the world, walked to the North and South poles and last year rowed 16,000 kilometres across the Pacific Ocean to Queensland’s Sunshine Coast – a journey which took 160 days.

He is also a Russian orthodox priest.

“I like to travel, that’s the truth, I was 15 years old when I went on my first adventure, it’s my lifestyle,” he said.

The adventurer will be in constant contact with his control centre and the team’s meteorologist in Belgium for updates on the best route.

These winds are at roughly the height that Fedor Konyukhovas balloon will travel. #Northam https://t.co/UXsRV8OX1M pic.twitter.com/FQbCm4WEDh

“We can track him through the satellite tracker … he already contacted Melbourne traffic control, he gave them his position, track and altitude [and] they gave him a new clearance,” Oscar Konyukhov said.

“We hope he can cross Australia in two days, which is a very good speed for us.

“In two days time if we can begin crossing the Pacific, we are happy people.”

“It’s like a really poor car journey [with a jet stream], some of it’s highway but when that ends you have to descend into the lower atmosphere, onto the sort of B-roads, before manoeuvring yourself back into the next bit of good jet stream.”