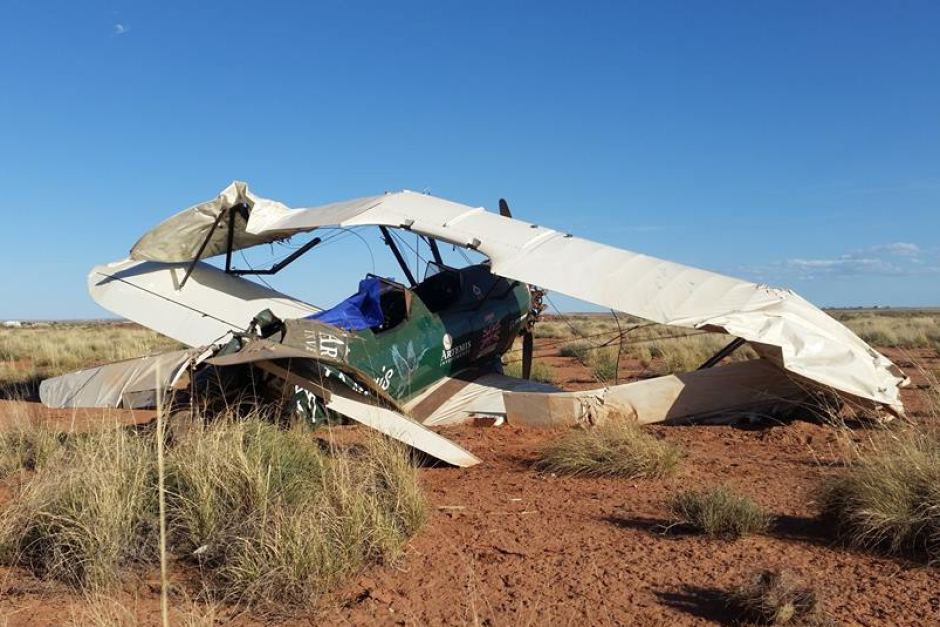 British aviatrix Tracey Curtis-Taylor and a crew member have survived a crash in which her plane cart wheeled after hitting the ground.

The pilot, who was in Australia recently when she recreated aviation legend Amy Johnson’s England to Australia epic flight, was flying her open cockpit bi-plane from Winslow, Arizona, bound for Phoenix when the accident happened late last week.

Her aircraft, a recreation of a 1942 Stearman, suffered a partial loss of power soon after take off, she wrote on social media.

“The Spirit of Artemis then started to sink, which was not a great scenario, with power lines directly ahead,” she said.

“Thankfully there was open desert to the south. I did a gentle left turn and then levelled off.

“It hit the ground and rolled forward about 20 feet but then the right wheel struck a dense sage root mound which tore off the right landing gear and threw the plane onto its left wing. It then cart wheeled tail over the nose in a cloud of sand and dust.”

Curtis-Taylor and crew member Ewald Gritsch managed to escape the crash unhurt, a fact she attributed to the plane’s construction.

“The impact was absorbed by the wings and the airframe and the cockpit remained intact. The Stearman is a famously strong aeroplane but my admiration for it is now absolutely boundless when I consider the wider implications of what could have happened.”

The Stearman, designed in the 1920s as a trainer for US Army and Navy pilots, is equipped with a satellite navigation system, but little else in the way of modern technologies.

Curtis-Taylor was on the third and last leg of her around the world trip, which began in South Africa in 2013.

She took off from Seattle in late April and was heading for Boston, but her plan is now on hold.

“I am devastated by all of this and profoundly sorry that I won’t be able to finish the flight, at least not this year,” she said.

Despite the setback, Curtis-Taylor said she had already been offered another plane, an identical replica of her Stearman, by her sponsors Boeing.

“But I have such a deep attachment to the Spirit of Artemis and we have come such a long way together that I cannot contemplate doing it in anything else.”

Curtis-Taylor said her immediate plan of action was to ship the fuselage back to the original restorer in Hungary where work to rebuild would start straight away.

“We had a spare engine on standby in case there was a problem and there is already a set of new wings,” she said.

On the day of the crash, Curtis-Taylor said she had experienced “some of the best flying I have ever known over some of the most beautiful and dramatic scenery I have ever seen”.

“The Grand Canyon, Lake Powell, Monument Valley and the Valley of the Gods. It all has an epic grandeur which is almost out of this world.”

She said she hoped her plane would be back in action by July.

The second leg of her round the world journey started in England last year, with Curtis-Taylor flying solo across 23 countries in three months, culminating in her touching down in Darwin on January 1.

“She was a 20th century icon in terms of what she achieved. My flight is very much a tribute to her. It is celebrating what the pioneers achieved and what women achieve now in aviation,” an exhausted and relieved Curtis-Taylor said at the time.