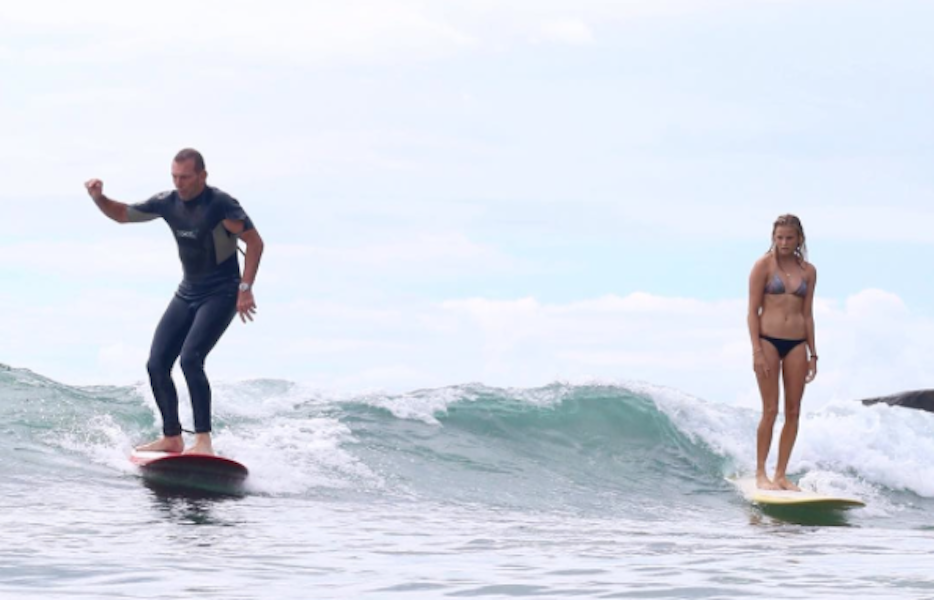 Former Australian prime minister Tony Abbott has clearly found plenty of ways to fill his newfound spare time, causing a stir over the Easter weekend when he hit the waves in Noosa.

Gold Coast teenager Ivy Thomas was quietly minding her own business while surfing at Noosa’s Tea Tree Bay when she spotted Mr Abbott hanging ten beside her.

Luckily for us, the moment was captured by Ms Thomas’ friend Bailey Eldering, who snapped a hilarious photo that Ms Thomas then posted on her Instagram account on Monday.

“So this morning I got dropped in on by the ex Prime Minister of Australia,” Ms Thomas captioned the image. “Thanks for capturing this bizarre moment @bailey.eldering #onlyinAustralia.” The photo has since received more than 2400 likes and hundreds of comments.

While Ms Thomas might look a bit miffed to have her wave crashed by a politician, she insisted she wasn’t bothered by the intruder.

“In the photo I look really upset, I didn’t know how to react,” she told The Huffington Post Australia.

“But it was awesome. He was talking to everyone, cheering people on waves. He’s actually a good surfer. I was expecting worse.”

“One of the locals said they saw him, but I didn’t believe him, it was so weird that he’d be there. Then I paddled out, and he was just sitting there. It was ridiculous,” Ms Thomas said.

“He was talking to some of the local guys about surfboards and fins. It was awesome to see that he’s a normal person like everyone else.”

Mr Abbott also posed for photos with other beach goers, with one reporting the former PM’s surfing skills were “not bad”.