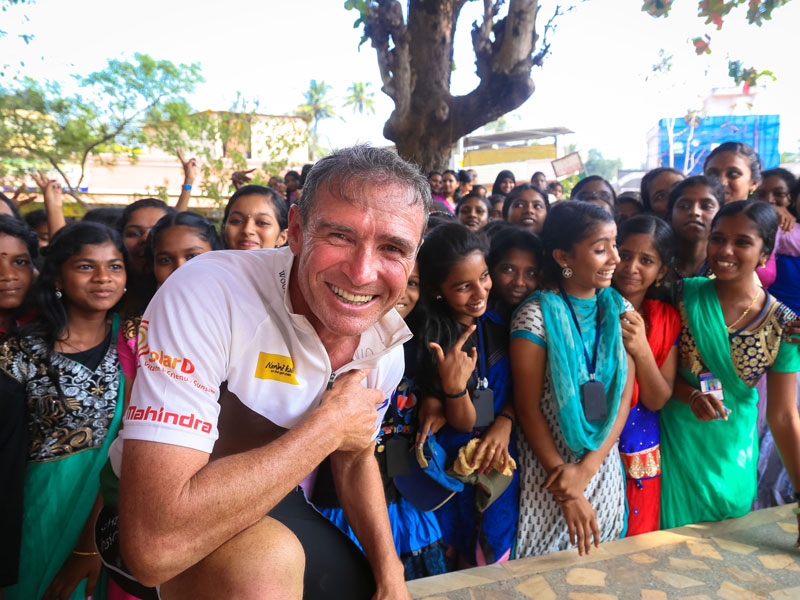 He has run through the Middle East, Antarctica and all around Australia but nothing could prepare Pat Farmer for his epic 4400km trek from India’s south to north.

On his fifth pair of shoes and having battled sore hips and severe stomach cramps throughout, the veteran ultra-marathon runner will complete his fundraising quest a day early in the heavily guarded Kashmir region on Tuesday.

Looking like a modern-day Forrest Gump, with up to 200 locals running behind him at a time, Farmer has been raising money, awareness and hope for disadvantaged girls’ education in India.

Despite being hospitalised with severe dehydration on day two, the 54-year-old has slogged through the equivalent of two marathons each day for 63 days and survived all sorts of weather conditions and terrain.

“There’s been no other run on earth that I’ve ever done – and I’ve done some amazing things – like this,” Farmer told AAP from the foothills of the Himalayas. “I’ve never run through a country with so much diversity.

“It’s been like that every step of the way. You go around the corner and the landscape changes, the language changes, the religion is different.

“And it’s such a sensory overload. The smells, the taste, the foods, and the weather conditions and the people themselves.”

The former federal MP is due to finish his trek – “The Spirit of India”, which began on India’s Republic Day on January 26 – at 4.30pm (AEDT) Tuesday after making a quick “sprint” for home.

He had been scheduled to finish on Wednesday but rockslides and mudslides due to the warming temperatures in the mountains have Indian authorities poised to cut the roads into his final destination at Srinagar.

“I bumped up the speed just to make sure that we arrived at the finish,” he said. “I went through knee-deep mud yesterday and climbed over fallen rocks that had been on the road and stopped the traffic.”

Farmer said his experience in Antarctica had helped in the freezing conditions he’s now encountering – two months after starting in 37C heat and humidity in India’s southern-most tip at Kanyakumari.

“It’s a complete contrast now,” he said. “There’s snow all around me and I’m near the top of a mountain.

“I started in 88 per cent humidity.

“It was hot when I was preparing in Sydney. But you can’t train for that.

“The humidity sapped all my energy straight away.”

After running 80-85 kilometres a day, Farmer and his team will cruise into Srinagar with a 30-35km final leg with thousands expected to turn out to cheer him home.

“A lot of the places outside the major cities not a lot happens,” he said.

“They’ve been crying out for the opportunity to run and do something special for themselves and they’ve really embraced it and love it.”