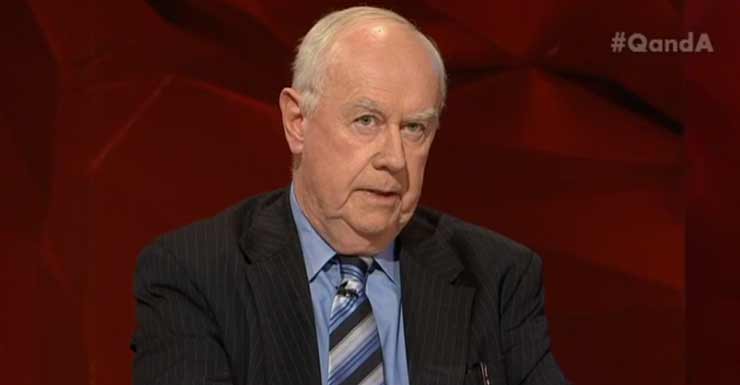 Prime Minister Tony Abbott shows “weakness” and is “arrogant” over his block on frontbenchers spruiking government policy by appearing on Q&A, according to an unlikely source of criticism.

And a government which can’t persuade voters “lives on borrowed time”, The Australian’s editor-at-large Paul Kelly wrote in a remarkable opinion piece which criticised Mr Abbott’s performance on selling the government’s plan for the future.

The opinion pages of The Australian generally favour the conservative side of politics, so this piece marks a break from tradition and demonstrates frustration with the Liberal Party’s direction.

He said the prospect of stopping Communications Minister Malcolm Turnbull from next Monday’s show is “too ludicrous to believe”.

“The idea that Malcolm Turnbull should not be allowed to appear next Monday night is too ludicrous to believe,” Mr Kelly wrote.

The Prime Minister last week issued a five-minutes-to-midnight directive that Deputy Nationals Leader Barnaby Joyce not appear on last Monday’s episode of Q&A, on a day when he had released his signature plan for agriculture in Australia.

“It makes no sense. It is arrogant. It treats his ministers as children,” Mr Kelly wrote of the decree.

“Barnaby Joyce was denied the chance to appear on the ABC’s Q&A with its extensive rural projection to promote the government’s policies in a forum where Joyce is more than capable of making his case.”

“What happened? There was no government voice. The truth, however, is that Abbott badly needs his ministers active on the media,” he wrote.

He foreshadowed danger for the government if ministers weren’t able to sell their plans in time to convince voters to elect them in 2016.

“Abbott has been diligent since February in improving consultation and decision-making but the defects remain obvious,” Mr Kelly wrote.

“The government wants tax reform yet lacks any effective argument for this stance.

“It believes in industrial relations reform yet seems intimidated about venturing into this area.

“Abbott is passionate about an indigenous recognition referendum yet his absence from the debate has seen the agenda completely hijacked in a way that is unacceptable to the Coalition.

“The Liberal Party has a policy of opposition to same-sex marriage yet seems struck dumb on mounting a tenable case.

“It had to beat an ignominious retreat earlier when it lost the debate over reforming the Racial Discrimination Act.

“The government stands by its higher education reforms yet it has not persuaded the public.

“Politics is about persuasion. A government that cannot persuade lives on borrowed time.

“Abbott is good at taking popular positions but this does not equate with persuasion.”