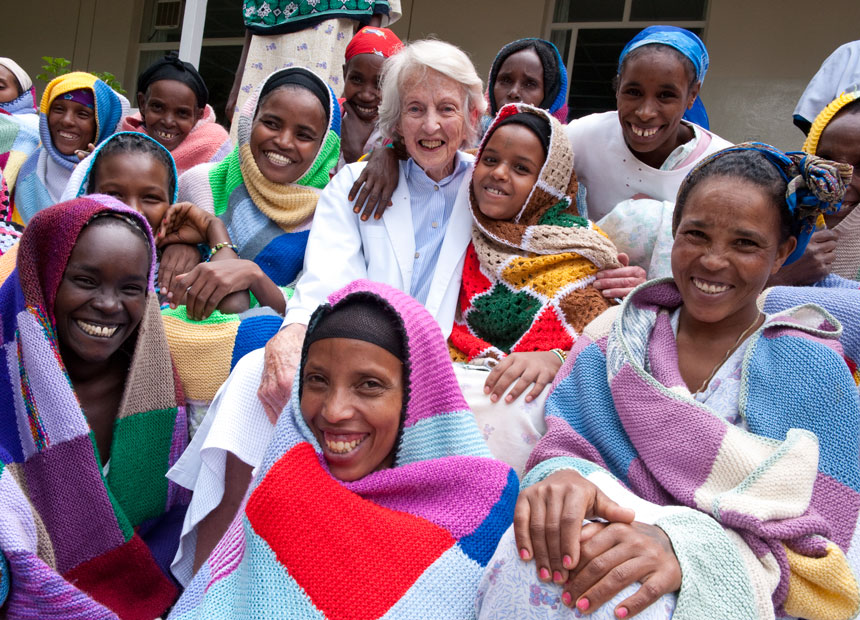 The life’s work of Australian doctor Catherine Hamlin in improving maternal health in Ethiopia was recognised this year when she was nominated for the Nobel Peace Prize.

But it costs around $6 million per year to keep Dr Hamlin’s obstetric charity operating, which is largely donated to by everyday Australians. The money is raised by a Sydney-based charity, Hamlin Fistula Ethiopia, which has five paid employees and an “army” of volunteers and interns.

Lucy Perry is a former art director who started volunteer work for the charity in 2004, before rising to chief executive of the charity two years ago.

“I ran a creative [agency] for 20 years,” Ms Perry says. “I could use all my skills, work really, really hard, and a client of mine would sell more concrete.

“Whereas in this role, I use the same skill set … and women on the other side of the world have their lives completely transformed.”

In 1959, with her late husband and fellow obstetrician Reg, Dr Hamlin began providing maternal care for some of the world’s poorest women and surgical procedures to repair fistulas when they occur.

Fistulas are holes in a woman’s bladder or bowel, which develop after difficult childbirth without proper medical attention. Sufferers can die, or struggle with lifelong incontinence.

But it’s a constant battle. Ethiopia has a population of almost 100 million but fewer than 200 obstetricians/gynaecologists and under 5,000 trained midwives.

The charity has a main hospital in the capital Addis Ababa, five regional centres, a midwifery college and training village where long-term patients can recover and learn skills.

It has 700 staff, including eight surgeons, and they are all Ethiopian. The only foreigners are Dr Hamlin and her Irish-born chief executive Martin Andrews.

The midwifery school is training some 90 students, who then go on the government payrolls in clinics that are equipped and supported by the charity.

“They go from being totally wretched, their lives almost unbearable, their life expectancy very short, to being cured, clean and dry and literally skipping out of the hospital gates with money in their pocket to catch a bus home. It gives myself goose bumps just telling you that,” Ms Perry said.

Ms Perry travels a lot for work, has three young children and her speeches pull in donations and publicise the charity.

One of her speeches this year was attended by businesswoman Janelle Kemp, a former operating theatre nurse who runs a specialised medical recruitment business.

“They’re doing such dynamic work,” Ms Kemp says. “The fact that they’re training the locals, that’s of huge interest to me.”

“There wasn’t a dry eye in the place, everyone reached out and wanted to give her money. I said: ‘What do you actually need?'”

She said: “I need a PA to get me organised.”

Now, Kemp Recruitment is paying the $50,000 wage of a personal assistant, in a 12-month deal that is expected to continue.

The person who was hired as Ms Perry’s personal assistant, Nicolette Lowe, is a former social worker and teacher who had worked in international development and shifted from Adelaide to take up the job.

Ms Lowe had been following Dr Hamlin’s work on social media for about a decade, and was inspired by the story.

“I had a real interest in supporting the work of the organisation,” she said.

Ms Perry says that executive PAs working for big companies can earn between $80,000 to $90,000 a year, but the not-for-profit sector has a lower pay scale.

“A large problem for charities is being given stuff they don’t need and it becomes costly to offload the stuff that they didn’t need in the first place,” she said.

“It’s so much better if you see an organisation and you love their work, to ask what they really need. This hit the nail on the head.”

Dr Hamlin turns 91 in January and the charity has to prepare for life after she dies. She vowed to continue her work, after the death of her husband and co-founder in 1993.

According to Ms Perry: “She’s a pretty down-to-earth lady and she’s been planning for her death since she turned 80. She never imagined she’d tick past 90 … when she was 89 I said: ‘Would she mind living another 10 years?’ She just laughed.

“She’s had that in her mind and planning for her absence for at least a decade. To be honest, when Catherine dies, Ethiopia will have the biggest funeral of all time.

“There will never be another figurehead like Catherine again. She will be a bit like Fred Hollows in that she will be the face of the organisation for decades to come.

“The staff will be devastated when we lose Catherine because they really do adore her, they call her Emaye, which is mother in Amharic.

“So the staff will be heartbroken but, as far as the clinical load and the training of midwives, it will be business as usual.”

For more information go to Hamlin.org.au or find another charity to support. But no more teddy bears for East Timor, please.

Why you should give not spend this Christmas