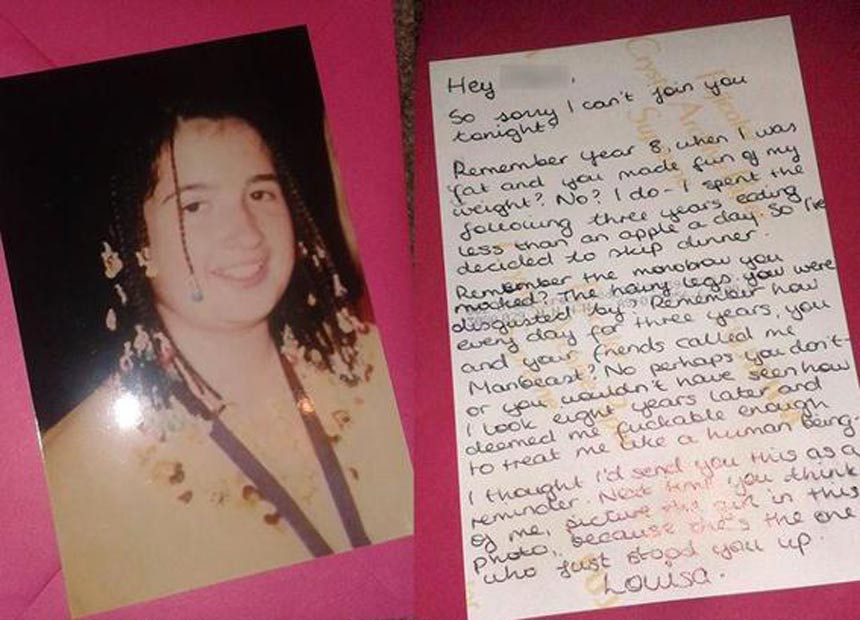 A woman tormented by a high school bully has had the ultimate revenge after her tormentor asked her out on a date eight years later.

British woman Louisa Manning was subjected to cruel taunts during high school, nicknamed “man beast” for her “hairy legs” and told she was”fat”.

But the tables were turned when a now 22-year-old Ms Manning had a chance encounter with one of her bullies at Oxford University.

Not recognising her, the man asked Ms Manning out for dinner, prompting her to finally fight back after years of low self-esteem.

Rather than attending the dinner, Ms Manning stood up to her ex-harasser, leaving a letter for him at the restaurant before heading to a party with friends.

“Hey sorry I can’t join you tonight,” the letter read.

“Remember year eight when I was fat and you made fun of my weight? No? I do — I spent the following three years eating less than an apple a day. So I’ve decided to skip dinner.

“Remember the monobrow you mocked? The hairy legs you were disgusted by? Remember how every day for three years you and your friends called me Manbeast?

“No perhaps you don’t or you wouldn’t have seen how I look eight years later and deemed me f***able enough to treat me like a human being.

“I thought I’d send you this as a reminder. Next time you think of me, picture the girl in this photo because she’s the one who just stood you up.”

The letter has received global attention, with Ms Manning’s personal Twitter account getting flooded with messages of support and links to news sites mentioning her name.

Despite the positive support, Ms Manning still has one regret: that she didn’t see his face. “I missed it!,” she wrote to a fan on Twitter.

“I left the note at the restaurant then went to a party… WISH I’d seen his face.”

Ms Manning said she had been careful to keep the identity of her bully anonymous, to protect him from “unnecessary” cyber bullying.

A guy who bullied me at school then asked me out for dinner was given this by a waiter last night. pic.twitter.com/3Ffpqez2tj