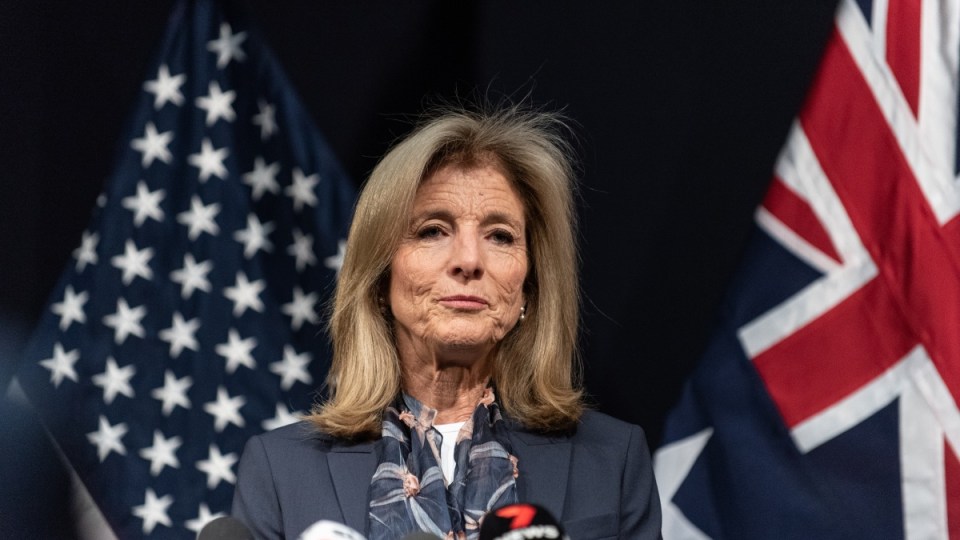 The new US ambassador to Australia, Caroline Kennedy, has chided a journalist in her first meeting with the country’s media.

Ms Kennedy arrived in Sydney on Friday morning after her ambassadorship was unanimously confirmed by the US Senate in May and she was sworn in on June 10.

“Everybody is so excited about working together in the Quad and in the Pacific,” she said minutes after landing.

“China certainly has a big presence here in the region but our partnership is what I’ll be focused on. There’s a big agenda and I can’t wait to get started.”

But it was a local male journalist who speedily found himself offside with Ms Kennedy. It came after the new ambassador declared that Network Ten national affair’s editor Hugh Riminton had interrupted a woman colleague.

“Did you just talk over the woman?” Ms Kennedy said.

She looked directly at Riminton, before laughing it off and returning the focus to his colleague.

Riminton took to Twitter later on Friday to “out myself” as the reporter who was ticked off – and maintain he had spoken up first.

Ms Kennedy, 64, is the only surviving child of the late US president John F Kennedy and is also the US’s first woman ambassador to Australia.

Her arrival on Friday came after the post had been vacant for about 18 months. Despite that, she said the Pacific had drawn the focus of Washington.

“It’s certainly a big focus now. This is a critical area in the region,” she said.

“The US need to do more. We’re putting our embassies back in, and the Peace Corps is coming and USAID is coming back.

“We haven’t been there for a while but that’s all tremendously positive. The US and Australia working together will make a big, big impact.”

Ms Kennedy will formally present her credentials to the governor-general on Monday.

Her arrival also coincided with a national address by a former US national security agency chief.

Former admiral Michael Rogers addressed the National Press Club on Friday about cyber-security and the threat posed by Russia and China in the cybersphere, as well as how the trilateral AUKUS security alliance can respond to the emerging challenge.

Ahead of the address, Mr Rogers told the ABC that Australia and the US were intent on the acquisition of nuclear-powered submarine through the trilateral AUKUS security alliance as soon as possible.

“The good news is that clearly is the intent of both the US government, the Australian government, we want to aggressively meet the timeline,” he said.

Mr Rogers added that shifting priorities has also resulted in a renewed pivot to the Indo-Pacific.

“For a long time, particularly the post 9/11 environment, the US was dealing with a counterterrorism challenge that was not centred in the Indo-Pacific region,” he said.

“But we have to acknowledge circumstances have changed. The Indo-Pacific region remains a cornerstone for the future for this world and we need to be fully integrated.”