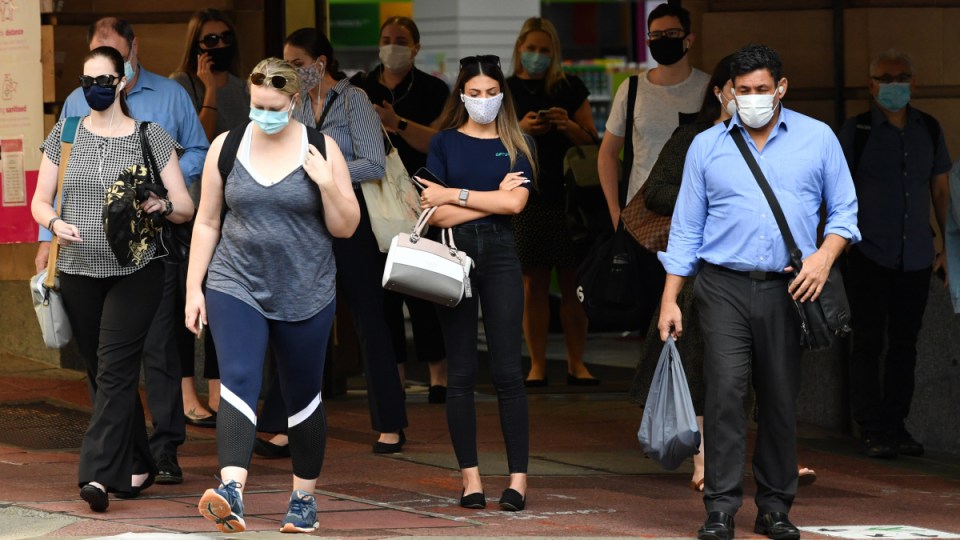 The prospect of facemask requirements returning is being discussed as new COVID-19 cases rise. Photo: AAP

Some states and territories are weighing up whether to reintroduce mask mandates, as COVID-19 cases spiral across the country.

As more transmissible strains of the Omicron variant emerge, discussions are underway in jurisdictions as to what measures could be used to curtail its spread.

Queensland Premier Annastacia Palasczuk said talks were ongoing on whether mask rules would return in some settings in the Sunshine State.

“We are not doing a mask mandate, but there are discussions happening about urging people in certain situations to wear masks,” she said.

“If anything changes, we will let the public know.”

Meanwhile, ACT Health Minister Rachel Stephen-Smith said a mask mandate was not being ruled out as a suggestion.

However, she indicated that other options were being considered.

“There is a view that mandatory mask requirements might not be as effective as they have been in the past, partly because those people who are willing to wear masks are already doing so,” she said.

“Some of those settings where we’re seeing transmission you wouldn’t be required to wear a mask anyway, so all of those things need to be balanced as we move through this winter period.”

They were expected to overtake the BA.2 strain to become dominant across the state.

“The Department of Health anticipates the prevalence of BA.4/BA.5 in Victoria is likely to result in an increase in cases – including reinfections – and hospital admissions and deaths,” Prof Sutton said on Monday.

“This is because the strain has a greater ability than BA.2 to evade immunity provided by vaccination and earlier COVID-19 infection.”

There were 26 deaths from COVID recorded on Monday, taking the national death toll to 10,039.

Hospitalisations have also reached 3511 across the country, the highest levels since February during the height of the Omicron wave.

Nearly 30,000 infections were reported nationally on Monday alone, with experts warning case numbers will climb even further as winter progresses.

Despite the rise in cases, border restrictions that were brought in as a result of the pandemic will be enforced for their last day on Tuesday.

Changes to the Biosecurity Act will come into effect on Wednesday, with international arrivals no longer needing to declare their vaccination status to enter the country.

The decision was welcomed by Australian Federation of Travel Agents chief executive Dean Long, who said the move was a critical step for the industry.

“Removing these last requirements will help reduce delays in airports and make it easier for Australians coming back home,” he said.

“With school holidays underway or about to kick off in many states and territories, and a rapidly growing number of Australians keen to escape the Australian winter, the pressure on our airports and airport staff is huge.”