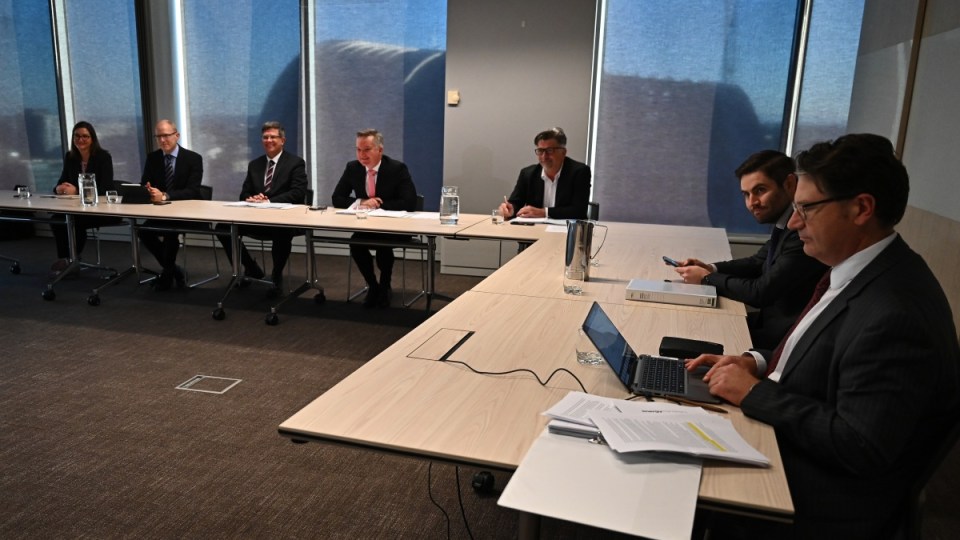 The energy summit has agreed on greater powers for the market regulator to buy and store gas. Photo: AAP

Energy Minister Chris Bowen has lashed the Coalition’s nuclear push as “a complete joke”, as he talked up emergency powers that will help the Australian Energy Market Operator help deal with the current crisis.

Mr Bowen said solutions resolved at a crisis meeting of state and territory energy ministers would have an “early effect” in fixing soaring gas prices.

The 11 key measures including given AEMO the power to buy and store gas to prevent shortfalls at times of high demand.

Mr Bowen said there was no “silver bullet” or overnight fix, blaming his predecessors for a rigid energy grid that remains unable to adapt to evolving pressures.

“The [AEMO] could not procure some gas and keep it in reserve to be released for urgent and crisis situations,” he said.

Mr Bowen said it was significant that state and territory ministers had also agreed at Wednesday’s roundtable to also move ahead with the capacity mechanism, under which energy retailers pay power providers to maintain extra capacity where needed.

“The previous government had said that they would work towards it coming into place in 2025. We need to do better than that,” Mr Bowen said.

“I am encouraging the Energy Security Board to expedite their work and get it out for further consultation as soon as possible.”

Nationals deputy leader Perin Davey said if the government supported a technology-based transition to net zero emissions, nuclear must be in the mix.

“Australia’s got to move on – it’s no longer the ’70s and ’80s, we no longer have the Nuclear Disarmament Party and even Greens voters are saying nuclear should be considered because it is zero emissions power,” she said.

The ageing of coal-fired power stations made it even more urgent, Senator Davey said.

The federal government has also rejected the technology as too expensive and not a serious solution to reducing power costs or cutting emissions.

“Nine years in office and then coming up with bright ideas on the other side of the election is point one. No credibility. Point two – nuclear is the most expensive form of energy,” Mr Bowen said.

“They want that debate? Bring it on. It’s just a complete joke.”

“I’d love to tell you that we can have energy in our country magically, but it doesn’t happen,” he told 2GB.

“It seems to me that Anthony Albanese and Chris Bowen have still got their training wheels on and have no idea what they’re doing.

“Families and businesses are going to be the ones that suffer because prices will go up.”

Mr Dutton said it would be an “outrage” if Australia lost business offshore, because the cost of energy became too expensive.

A national transition plan for the energy grid will be developed ahead of the next meeting of state and territory ministers in July.