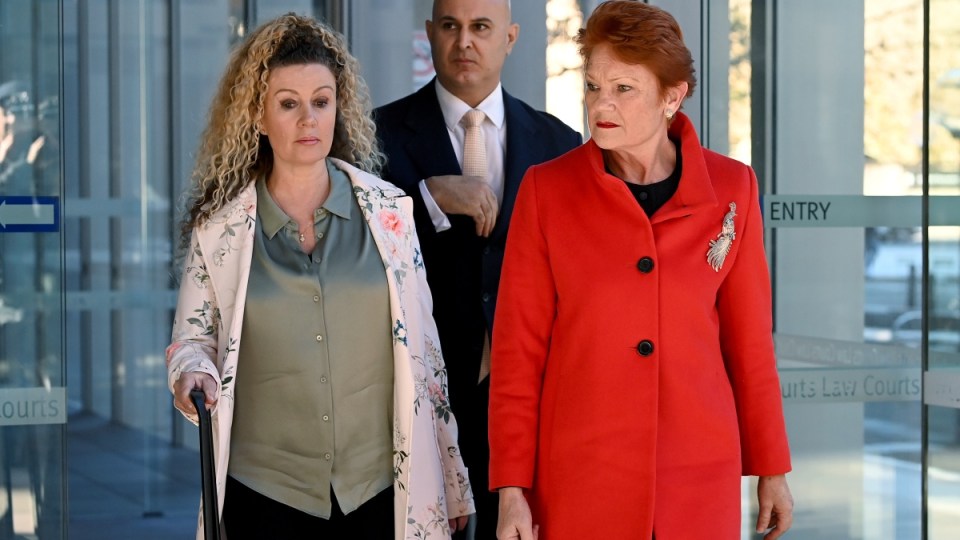 A staffer of former One Nation senator Brian Burston says her boss regularly degraded, humiliated, and disgusted her with sexual harassment including shoving money down her breasts.

Terri-lea Vairy was called to give evidence in the Federal Court on Thursday on behalf of Pauline Hanson, who is being sued for defamation by her former colleague.

Mr Burston says the One Nation leader accused him of sexual harassment on social media, via a text message to his wife, Rosalyn Burston, and during a television interview.

Ms Vairy, 47, said she was originally employed by Rosalyn Burston as a cleaner at their home before Mr Burston offered her a job as an electorate officer, with an “astronomical” pay rise.

Mr Burston would allegedly go on to confess his love her for, saying it began when he first saw her “walking down his driveway”.

She said the alleged sexual harassment began soon after she was hired in May 2017 with comments such as: “Nice to have a good looking sheila in the office.”

The comments escalated to greetings and goodbyes with kissing on the lips, and he tried to “passionately kiss me” following a function in Canberra in February 2018, she said.

“I slapped him on the back and told him to settle down.”

In one alleged incident, she said he told her that she had “perfect sized-breasts”, and asked if they were implants, while on another he gave her a birthday card and $100 note.

“I tried to give it back … he then, forcefully shoved it between my breasts … I was in shock,” Ms Vairy said.

Mr Burston would regularly take her out to lunch, comment on her “sexy” appearance and touch her clothes, before her daughter was employed and tried to accompany them everywhere, she said.

“I told her … to never leave me alone with him.”

Ms Vairy said she became increasingly concerned about other staff members thinking there might be something going on.

“Did you ever ask him to stop?” Senator Hanson’s barrister, Sue Chrysanthou SC, asked.

“Yes, I told him it was making me uncomfortable,” Ms Vary said.

But he didn’t stop, she said, saying she turned around one day to see him “biting and licking his bottom lip … and staring at my bottom”.

Out at a concert one night, she and her co-worker Wendy Leach were being “harassed” by Mr Burston for photos of Ms Vairy, threatening to fire them if they refused, she said.

But the alleged humiliation that brought Ms Vairy to tears in court was after her romance with former senator Peter Georgiou was leaked to the media.

“Was (the article) placed somewhere shortly after that?” Ms Chrysanthou said.

“Yes, on the office window in Canberra,” Ms Vairy said.

She said Mr Burston put the article on the window, but didn’t quit as she “needed the money” and didn’t lodge a complaint with HR.

“It was known that if you do he gets notified straight away,” Ms Vairy said.

The price hikes Telstra will roll out on July 1
Climate, deportations on Aust-NZ agenda
Today's Stories