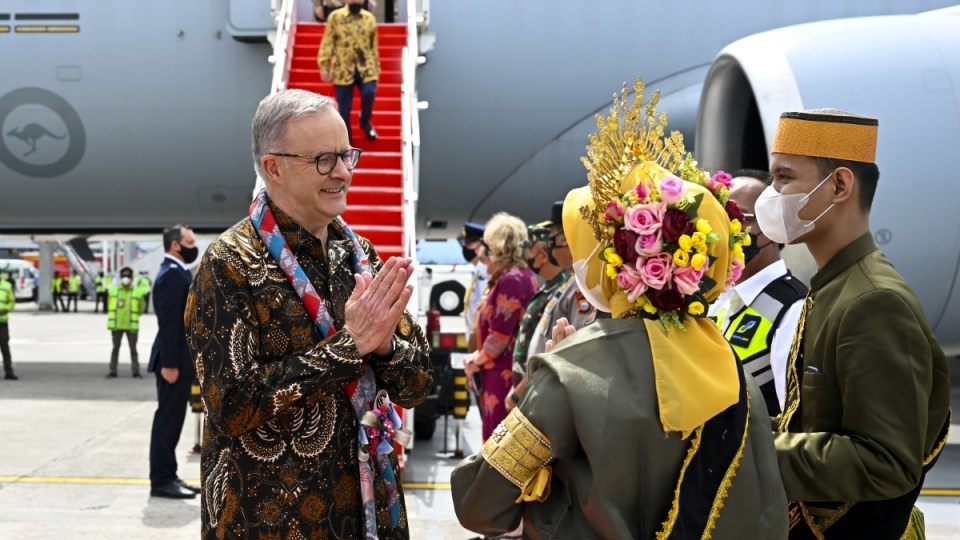 Prime Minister Anthony Albanese has described Australia’s relationship with Indonesia as sophisticated, as he touched down in the city of Makassar on the second day of his visit to the Asian nation.

Mr Albanese landed in the Indonesian port city on Tuesday, to receive a ceremonial welcome and be gifted a traditional silk necklace on arrival.

He is the first Australian prime minister to visit Makassar, as the government looks to extend ties with Indonesia.

Speaking shortly after arriving, Mr Albanese said he wanted to emphasise Australia’s relationship with the whole country and not just Bali and Jakarta.

“It’s a sophisticated relationship,” he said.

“I wanted to make sure that we send a message as well that we understand that this vast country is one that’s diverse, one that is a land of opportunity.

“Makassar has a great future as part of Indonesia’s growth.”

Makassar, on the island of Sulawesi, has historical trade ties with Australian Indigenous people going back hundreds of years.

His speech touched on multiculturalism, trade, as well as education partnerships between Australia and Indonesia.

Afterward, Mr Albanese met the governor of South Sulawesi for formal talks. He was to finish his trip to Makassar with a visit to a flour mill, one of the largest in the world, that uses Australian wheat.

Mr Albanese said Makassar represented an important financial centre in Indonesia which would be critical for trade links.

“There are huge opportunities for Australian business and investment here in Indonesia,” he said.

One of the leaders in the delegation was Business Council of Australia chief executive Jennifer Westacott, who said the trip had been a success.

“There was more to us being here in Indonesia than trade and investment, it was about resetting Australia’s direction.”

Mr Albanese said he wanted to realise the potential of economic partnerships with Indonesia, with the Asian nation set to become one of the five-largest economies in the world.