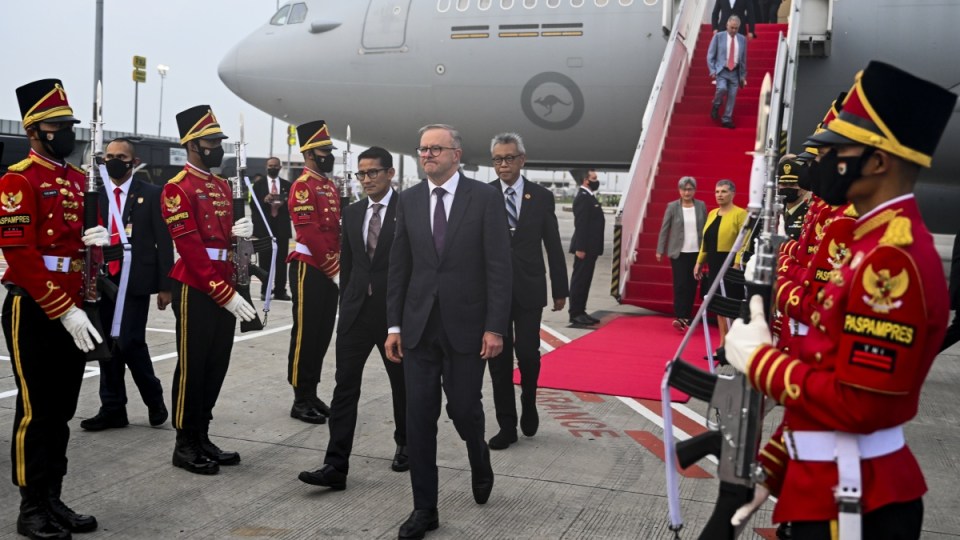 The prime minister was given a guard of honour and marching band procession into the Bogor Palace in the Indonesian capital. Photo: AAP

Prime Minister Anthony Albanese has met Indonesian President Joko Widodo, being treated to a ceremonial welcome and a bike ride on his first full day in Jakarta.

Mr Albanese was given a guard of honour and marching band procession into the Bogor Palace in the Indonesian capital, ahead of formal one-on-one talks with the president.

Before the formal talks between the two leaders began, Mr Albanese planted a tree with President Widodo.

They then rode bikes together around the grounds of the presidential palace.

Mr Albanese said he was deeply touched by the Indonesian president’s suggestion of the bike ride, given many from humble beginnings in the country use the transport to get around for essentials and their daily lives.

Mr Albanese noted both he and the Indonesian president came from humble beginnings before going into office.

Earlier in the day, Mr Albanese held a business breakfast with a delegation of Australian business leaders and chief executives.

He briefed the delegation on plans for Australia elevating its relationship with Indonesia and South-East Asia, as well as boosting underdone trade and investment links.

Foreign Minister Penny Wong earlier met her Indonesian counterpart, and said forging closer ties with Indonesia and the broader region would be crucial amid increasing tensions in the Indo-Pacific.

“We live in a time where the region is being reshaped and what is important is that countries work together to ensure that the region remains peaceful, prosperous and respectful of sovereignty,” she said.

Mr Albanese will also meet ASEAN Secretary-General Dato Lim Jock Hoi, before taking part in a wreath-laying ceremony and then a business dinner.

He will fly to Makassar on Tuesday for the final day of his trip to Indonesia.

During the election campaign, Mr Albanese stressed Indonesia would be his first port of call for bilateral overseas visits.