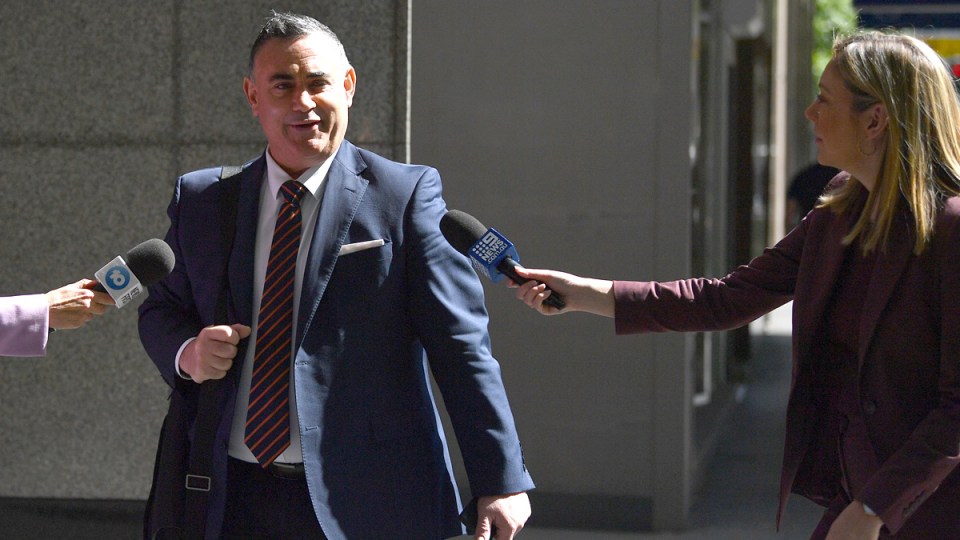 A judge has ordered Google to pay $715,000 damages to John Barilaro.

Former NSW deputy premier John Barilaro has been awarded $715,000 in defamation damages from Google for a “vindictive” social media campaign that left him traumatised.

The tech giant and commentator Jordan Shanks who posted defamatory videos on its YouTube platform also face possible prosecution for contempt of court.

The now-retired MP sued Google and Shanks over videos titled bruz and Secret Dictatorship published on his friendlyjordies channel in 2020.

The videos included claims that Mr Barilaro was a corrupt conman who should be jailed, who committed perjury nine times and engaged in blackmail.

Mr Barilaro settled his Federal Court case against Mr Shanks in November when he provided an apology, edited the videos and was ordered to pay $100,000 costs to the former MP.

On Monday in the Federal Court, Justice Steven Rares said Google did not apply its own policies against hate speech, cyberbullying and harassment as Mr Barilaro was subjected to a relentless, racist and abusive campaign on YouTube for over a year.

Mr Barilaro had planned to retire from politics at the 2023 state election, but he testified that he resigned in October 2021 after being attacked by people wearing bruz shirts during a byelection and feeling “broken”.

The judge found Mr Barilaro “was traumatised by Google’s and Mr Shanks’ campaign and that it caused him to leave public office prematurely”.

Mr Shanks repeatedly and vindictively used descriptions of him such as “wog”, “greasy”, “greasy little scrotum”, “meatball” and innuendos linking him to the Italian mafia.

Mr Shanks also engaged in cyberbullying trying to intimidate Mr Barilaro from bringing proceedings to court and to intimidate his lawyers from acting for him.

In a YouTube video called bruz eternal in May 2021, Mr Shanks said Mr Barilaro and his lawyers should have watched a video he published earlier about Clive Palmer, saying “it would have given you a preview into what threatening to sue me would look like for you”.

Mr Shanks then told viewers that he had created and was selling a keychain, which he displayed with Mr Barilaro’s head in a Mario cap and a scrotum below it.

“Google was part and parcel of this disgusting behaviour because it facilitated, published and kept up on YouTube this and similar videos,” Justice Rares said.

Days after his settlement with Mr Barilaro, Mr Shanks mocked it and threatened “we finished the defo suit, but make no mistake; this entire ordeal is far from over”.

He repeated segments from earlier videos of his racist and offensive comments.

Google did nothing to stop the conduct on its YouTube platform and Google’s conduct in this proceeding was improper and unjustifiable, Justice Rares said.

“That conduct aggravated the damage to Mr Barilaro’s reputation and the hurt to his feelings very considerably,” he said.

“In my opinion, it is necessary to award a substantial sum in damages to compensate Mr Barilaro for the harm that Google caused to him and to vindicate his reputation.”

Justice Rares has referred the conduct of Mr Shanks and Google to the court’s principal registrar to consider proceedings against each for “what appear to be serious contempts of court by bringing improper pressure to bear on Mr Barilaro and his lawyers not to pursue this proceeding”.

The judge will also hear from the parties on what costs order he should make.

Outside court, Mr Barilaro said he felt vindicated but all he had wanted from Google was an apology and the videos removed.