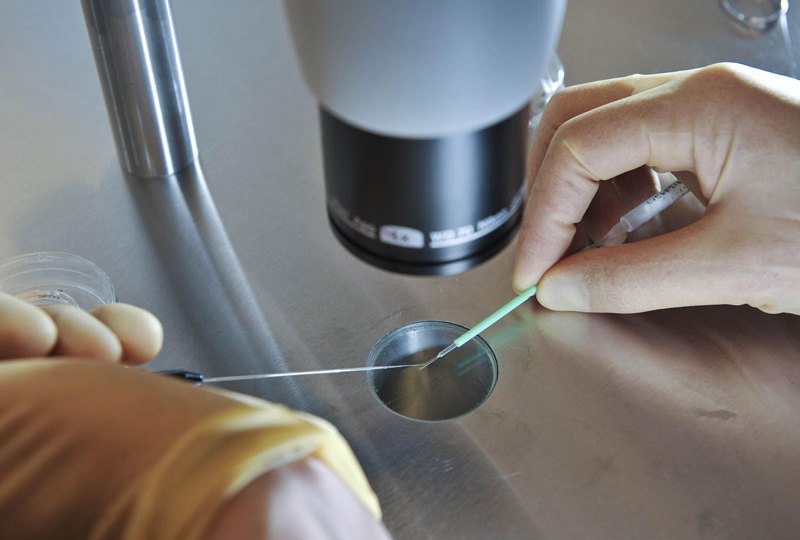 In-vitro maturation is when eggs are matured in a lab, avoiding the need for hormone injections. Photo: AAP

A less painful, home-grown and much cheaper version of traditional IVF is now available for Australian women hoping to have a baby.

The Royal Hospital for Women in Sydney is the first provider in Australia to offer the CAPA-IVM, a new fertility treatment for women with fewer hormone injections than traditional IVF, at a significantly lower cost.

In-vitro maturation is when eggs are matured in a lab instead of in a woman’s body, avoiding the need for about two weeks of hormone injections.

While standard IVF requires women to take follicle-stimulating hormones to stimulate egg cell growth before they are removed, IVM retrieves eggs while they are still in the immature stage and brings them to maturity in cell culture.

“Regular IVF is expensive because there’s lots of drug costs involved. IVM uses around 80 per cent less hormones and is cheaper, around half the cost,” RHW’s Professor Bill Ledger said.

“A woman can walk into the clinic on Monday, have two doses of hormone shots to prime the ovary and then her eggs can be collected on Thursday,” he said.

He estimates around 15 per cent of women who experience fertility issues will be eligible for the new CAPA-IVM treatment.

It is ideally suitable for women under 38 who have a good egg count.

The treatment is particularly promising for women with polycystic ovaries, a condition which affects around 10-15 per cent of Australian women.

IVM has been around for years but its chances of success are slimmer since it’s difficult to replicate what the ovary does in a lab.

But with the new method the chances of fertility drastically improve.

“CAPA switches off the progression of the egg for 24 hours. So it grows more slowly and it matures more healthily and it’s more fertile when you introduce it to the sperm,” he explained.

“It’s giving us a longer window of time to work with the egg.”

“This is a wonderful example of the lifecycle of research and the huge difference it can make in people’s lives. It is proof that ‘bench-to-bedside’ research is alive and well in Australia,” Prof Gilchrist said.

A recent trial in Vietnam found pregnancy rates were the same with CAPA-IVM as they are in regular IVF, although IVF patients had more embryos to freeze.

Last year, under 200 women only accessed low-cost IVF for infertility issues and fertility preservation at the hospital, which is calling for more donations to fund its ground-breaking treatments.