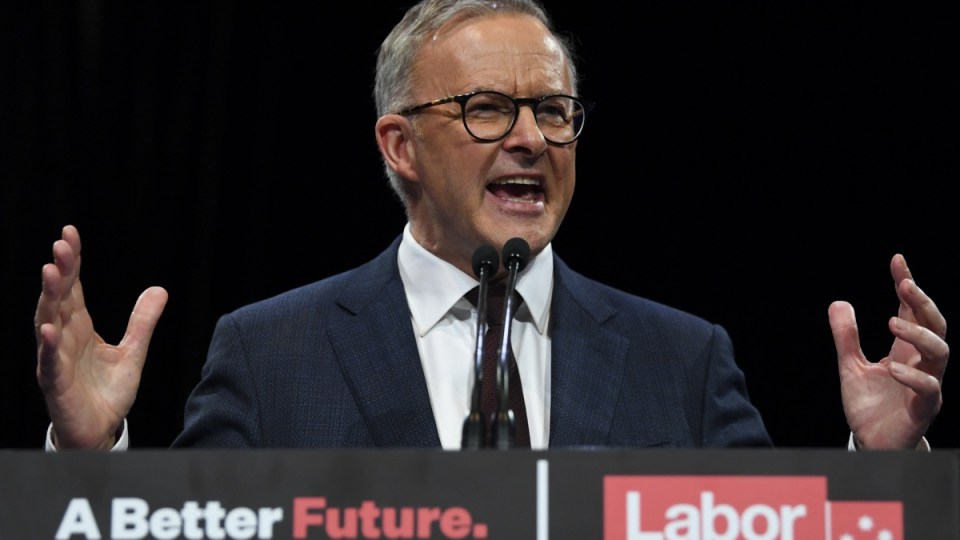 The opposition leader has said he would seek to implement the Uluru Statement from the Heart in full, should Labor win Saturday's election. Photo: AAP

Anthony Albanese has indicated he wants to maximise the success of a referendum recognising Australia’s Indigenous people in the constitution.

The opposition leader has said he would seek to implement the Uluru Statement from the Heart in full, should Labor win Saturday’s election.

While speaking with reporters in the Sydney marginal seat of Bennelong, Mr Albanese said an Indigenous voice to parliament would not be a third chamber of parliament.

“I want to work with First Nations people on the timetable for a referendum, I also want to reach out across the aisle,” he said on Thursday.

“It’s simply good manners, in my view, that if we have circumstances whereby something I do will impact you as a human being, that you ask someone about their impact and you listen to their response. That’s what a voice to parliament is.”

The comments come as Mr Albanese started a last-minute marginal seat campaign blitz during the final two days of the election.

The Labor leader started the day in Sydney before he will move on to Brisbane, a crucial state for the opposition to pick up ground if they are to have any chance of forming government.

While in Bennelong, Mr Albanese visited a childcare centre, where he was seen painting alongside children.

The visit came before Labor will outline its formal policy costings after days of speculation surrounding the figures.

Bennelong is held by the Liberals by 6.9 per cent, but Labor is confident it can pick up the seat following the retirement of incumbent John Alexander.

Mr Albanese is set to also visit seats in South Australia, Tasmania and Victoria in coming days before Australians head to the polls on Saturday.

It comes after the opposition leader used a speech to Sydney’s Italian community in the seat of Fowler on Wednesday to take a swipe at recent Liberal attack ads.

In the address, Mr Albanese said the Liberals thought it was “still OK” for people to make fun of his name.

Liberal attack ads with the slogan “it won’t be easy under Albanese” have been a frequent sight on TVs during the election campaign.

Addressing the comments on Thursday, Mr Albanese said he was not accusing the government of being racist, but indicated the concerns with the ads had been raised by multiple people.

“People who have ethnic names of my age, or perhaps a bit younger, certainly older, had people made fun of their names at school,” he said.

“That’s what happened, and people have raised it with me in the Italian community that they’re concerned about it.”

“If (the opposition leader) is that precious, and he can’t hack a campaign, then how on earth is he going to handle running this country?” he told reporters in Tasmania.

Despite early campaign stumbles, the opposition leader still he was still ready for the challenges of being in government.

“We’ve been through a six-week campaign. There hasn’t been a single criticism raised by the government of anything I did (as deputy prime minister or infrastructure minister),” he said.

Tom Richardson: The lost art of patience and the joy of a mixtape
Concern about COVID-19 deaths in aged care
Today's Stories