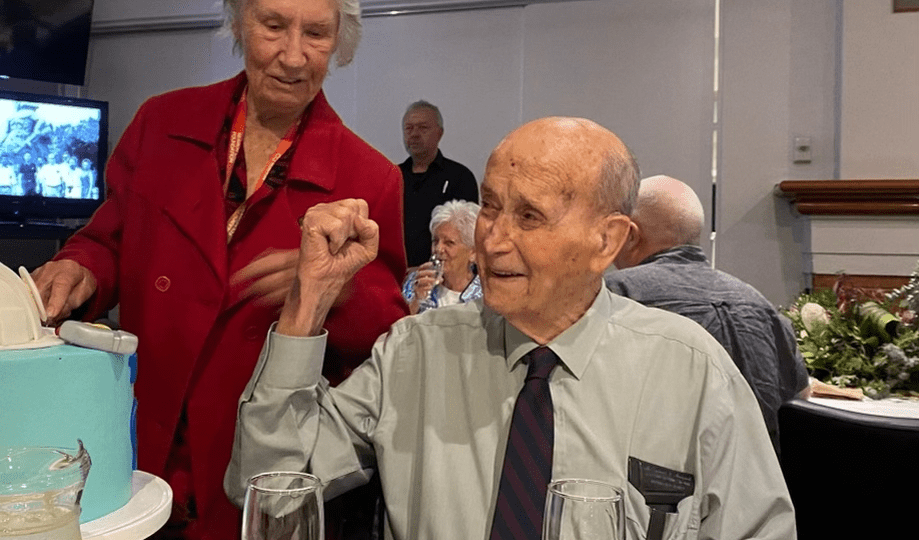 Tom McDonald died on the morning of Saturday, April 16, aged 95.

He was a loving husband, father, grandfather and had friendships with unionists from their 20s to their 90s right across the country.

Tom was a carpenter, a union official for the Building Workers Industrial Union, the assistant secretary and then secretary of that union, an ACTU executive member and then the vice president of the ACTU.

He was an agitator, an educator, a member of the Communist Party and leader of the left in Australia, an internationalist, a peace activist, a philosopher, an author, and a mentor to thousands of young union leaders.

Together with his soulmate Audrey, they were in a partnership sharing a revolutionary life.

Tom was one of the last great industrial warriors who helped reshape Australia. Like most of his kind, he left school very early, and his tertiary study was in the workplace, in the party and in the accumulations of ideas from the great left-wing writers.

The great loves of his life were Audrey and his family, the union movement, and a modest punt on race day.

He lived by his principles and was a socialist, he said, because he wanted a “cohesive society, built on democracy, social justice and equal opportunity for all.”

He was the second-oldest of 10 children and the oldest son.

His father’s name was bestowed on him and as he grew up so increased many of the family responsibilities.

For nearly all his early life, it was the period of the Great Depression and then the Second World War. His father was a cleaner for the City of Sydney. He drove the garbage cart behind an old horse called Bob. In his spare time, he was also an SP bookmaker at Ma Smiths Hotel in Bay Street, Glebe.

As Tom said, Glebe was a tough area. Fighting was not uncommon.

It was the working-class sports of marbles, billy cart racing, rugby league and cricket. There were no trips across the harbour, no Luna Park, no movies. Broken biscuits, Sunday lunch and especially Christmas dinner were the special treats of the McDonald family.

When Tom left school, he did so to contribute to the family.

Tom’s early aspiration was to be an electrician, but he finally secured an apprenticeship at the Cockatoo Docks as a ship painter and joiner.

In 1950, Tom McDonald became an organiser with the BWIU.

Tom said his union career was not just about wages and conditions, but also about civilising the building industry.

Tom did this with many others – from the Snowy Mountains to central Sydney, to industrial tribunals and the streets.

Threatened by “judges police”, the standover men hired by employers, it was no easy task.

Although Tom’s first priority was the welfare of building workers he was foremost a warrior for his class. The working class meant something very important to Tom – it was the community he lived in, the people he worked with, and also where he believed the hope for a better world lay.

The BWIU was not just involved in industrial issues. This union was part of the great political forces that were gathering to oppose the war in Vietnam, to oppose apartheid in South Africa, and that gave support to the early claims of Indigenous leaders for land rights.

With the support of other unions, Tom McDonald and the BWIU gave weight to these protests, not just in terms of sentiment but also in the financial and industrial support that they gave. It contributed to the ballast of the movement.

The BWIU and Tom McDonald also gave ballast to the ACTU and negotiations for the Accord under Bob Hawke.

The three great safety nets of the Accord period – Medicare, superannuation and minimum wage rates – are all imprinted with Tom’s contribution.

When Tom retired as the national secretary of the BWIU he did not retire from the union movement.

Tom became a mentor and elder in the ACTU’s Organising Works program. This involved his participation in the training of thousands of young union organisers from 1994 to 2019, travelling on the train from his home on the central coast to Trades Hall in Sydney or elsewhere.

This enormous contribution has no equivalence in the union movement and has an ongoing and incalculable legacy.

After spending his working life contributing to the union movement, Tom spent the next quarter of a century lovingly watching over it and pouring all that he had been taught from his life as a unionist into the generations who were just starting out, like he had as an apprentice on Cockatoo Docks.

Tom believed in the greater “we” and in building collective strength.

One of his most famous sayings was one passed on to him as a young trade unionist – “the trade union movement is a “we” and not an “I” movement”.

Right up to his final years he was writing books and producing YouTube videos and podcasts, gifting his wisdom to future generations and the union movement. He was always at hand for a quiet word of advice and encouragement.

While Tom’s legacy of achievement for building workers’ conditions, Medicare, superannuation and minimum wage was prodigious by any standard, his most lasting impact may be as a philosopher of activism with a heavy focus on strategic thinking.

Tom drew a distinction between short-term tactical and longer-term strategic decision making. He taught that gains do not come on a silver platter. The lessons he taught were about trusting working people, distilling issues, formulating a strategy to win, and the power of storytelling.

Tom believed in working people and was their champion.

For that reason, he was and will always remain a union and political democrat. He was always a socialist but he could work with employers. He was humble and intelligent. He was generous and highly principled.

Together with Audrey, history will have him on the side of the people who hated war, fought for peace, railed against discrimination and claimed equality for women, and who supported Indigenous Australians, not as a concession to be given but as a right warranted by living in a decent society.

Tom McDonald was one of the great union leaders in our nation’s history.