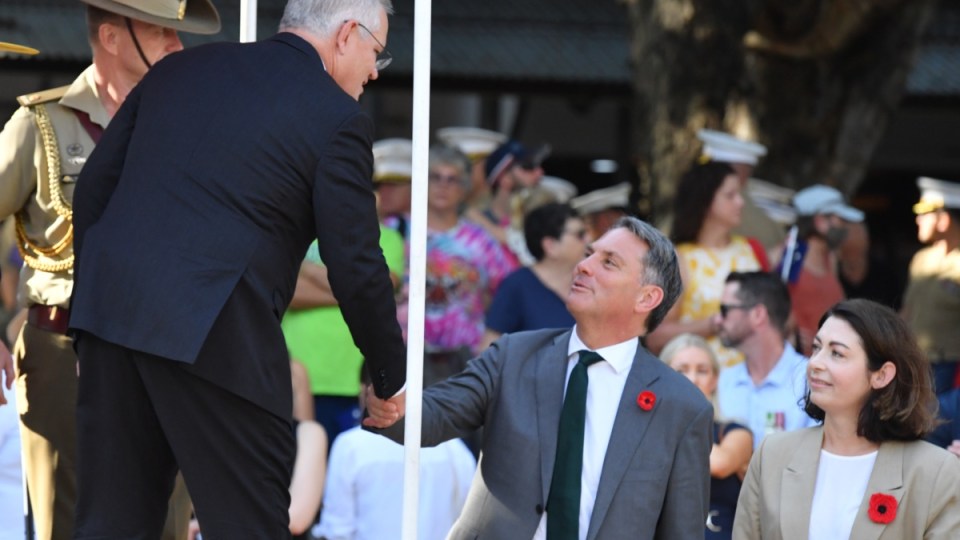 Scott Morrison and Anthony Albanese have linked the war in Ukraine with the Anzac spirit, as political leaders paused election campaigning for Anzac Day.

The prime minister and Labor deputy leader Richard Marles are in Darwin for services on Monday, as the nation marks the 107th anniversary of the Gallipoli landings.

Mr Albanese remains in isolation at his Sydney home as he recovers from COVID-19.

Mr Morrison said in a statement ahead of the service it was a day of rededication to the principles and values many Australians had fought for.

“Even now, as we come together, on this Anzac Day, around the world and particularly in Ukraine, there is a new fight for freedom,” he said.

“Australia has seen this before and we have stood against it.”

He said it was a time for the nation to look forward “with optimism and with confidence, because of the freedom and because of belief and our passion for our country and our future together”.

Mr Albanese said in a video message the Australian character was confirmed at Gallipoli and since then Australians had “stood steadfast as warriors and as builders and keepers of the peace”.

“Yet as the war in Ukraine so tragically reminds us, darkness is not vanquished from the world,” the Labor leader said.

National security is set to remain a key issue in the election campaign with Labor and the coalition exchanging barbs over the handling of the Solomon Islands government’s deal with China.

Mr Morrison, who did not conduct a media conference on Monday, says his Solomons counterpart Manasseh Sogavare has made it clear there would be no Chinese naval base.

“That is what he has said. So he clearly shares our red line,” Mr Morrison told reporters on Sunday.

The Chinese embassy in the Solomons said in a statement posted on Facebook on Monday that reports of a military base were “fabricated misinformation”.

“Any attempt to inflame the situation, provoke tensions and stir up confrontation in the Pacific island region does not serve common interests of regional countries and is doomed to fail.”

Labor has accused the government of bungling the Solomons relationship, cutting aid to the Pacific and mishandling defence projects such as the scrapped submarine deal with France.

“This is a government which beats its chest,” Labor deputy leader Richard Marles told reporters in Darwin.

“When it comes to actually delivering, and doing what needs to be done, it’s a government which repeatedly fails.”

“We want a normalised relationship with China as quickly as possible but these acts of aggression we’re seeing at the moment aren’t acceptable to our country or to countries that stand for what we stand for,” he told the Nine Network.

The election campaign is expected to be full steam ahead on Tuesday, with Labor planning to hold its official launch in Perth this weekend.

‘Australia votes for climate action’: How the world framed Labor’s victory as a win for the planet
Aged-care pay rise case set to begin
Today's Stories