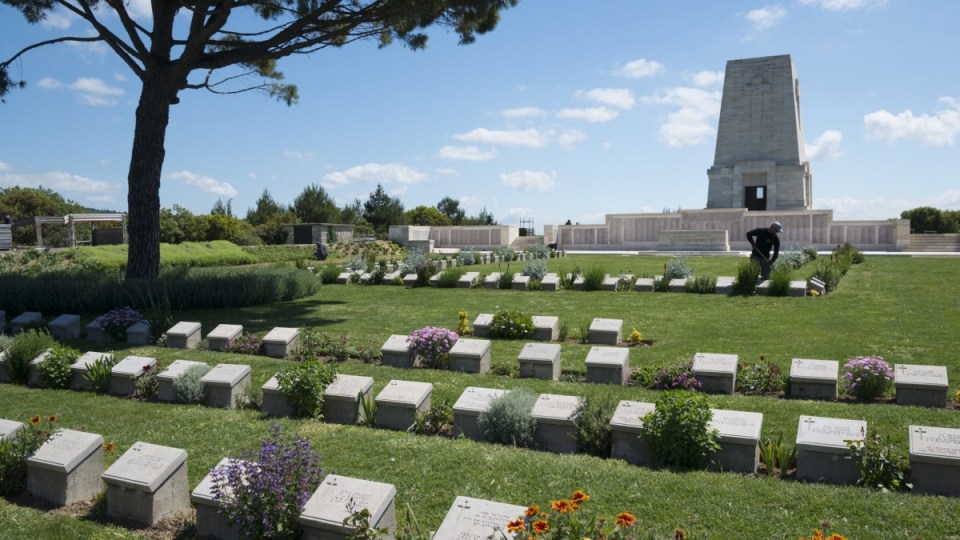 The Lone Pine Cemetery on the Gallipoli Peninsula. Photo: Getty

Travellers from Australia and New Zealand have joined Turkish and other nations’ dignitaries at the former World War I battlefields at Gallipoli for a solemn service at dawn to remember troops killed during an unsuccessful British-led campaign to take the Ottoman Empire out of the war.

As the sun rose on Monday, participants held a minute of silence to reflect on the sacrifices of tens of thousands of soldiers from the Australia and New Zealand Army Corps, known as Anzacs, who landed at the beaches at Gallipoli in northwest Turkey.

“At this time 107 years ago, on ships that covered the ocean off this tiny bay, thousands of Australians and New Zealanders were preparing to land on this rugged coast,” New Zealand army chief Major General John Boswell said during the ceremony.

“For all but a few, this was to be the first experience of the horrors of combat.

“Most were convinced that, as one New Zealand soldier wrote in his story: ‘It will be the greatest day in our lives.’ The sunrise they witnessed that day was for all too many to be the last they ever saw,” he continued.

“Across our countries, home after home was plunged into mourning.”

The Gallipoli campaign aimed to secure a naval route from the Mediterranean Sea to Istanbul through the Dardanelles, and knock the Ottomans out of the war. The April 25, 1915, landings marked the start of a fierce battle that lasted for eight months.

The battlefields and cemeteries at the site in Canakkale, in northwestern Turkey, have become a place for pilgrimage for many Australians and New Zealanders who sleep on the beaches until the start of the dawn service.

But the ongoing coronavirus pandemic kept the number of visitors small.

Among those who made it to the ceremony was 27-year-old Taylor Murphy from Victoria, Australia, who said the pros of being at Gallipoli “outweighs the cons of the pandemic”.

“It feels quite surreal to be here,” she said. “We are feeling quite emotional.”

The tragic fate of troops from Australia and New Zealand is believed to have inspired the two nations to carve up national identities distinct from the British. Anzac Day is marked as a coming of age for the two nations.

Gallipoli is also considered to be an important turning point in the history of modern Turkey. It was at Gallipoli that Mustafa Kemal Ataturk rose to prominence as a commander of the Turkish forces and went on to lead Turkey’s War of Independence and found the Turkish Republic.

On Sunday, the remains of 17 missing French soldiers were handed over to French military officials and put to rest alongside other fallen comrades during separate remembrance ceremonies held for French, British and other soldiers.

Their remains were found during restoration work on a castle and surrounding areas on the Canakkale Peninsula.

Only one out of the 17 French soldiers, Cpl. Paul Roman of the 1st Engineers Regiment, has been formally identified.