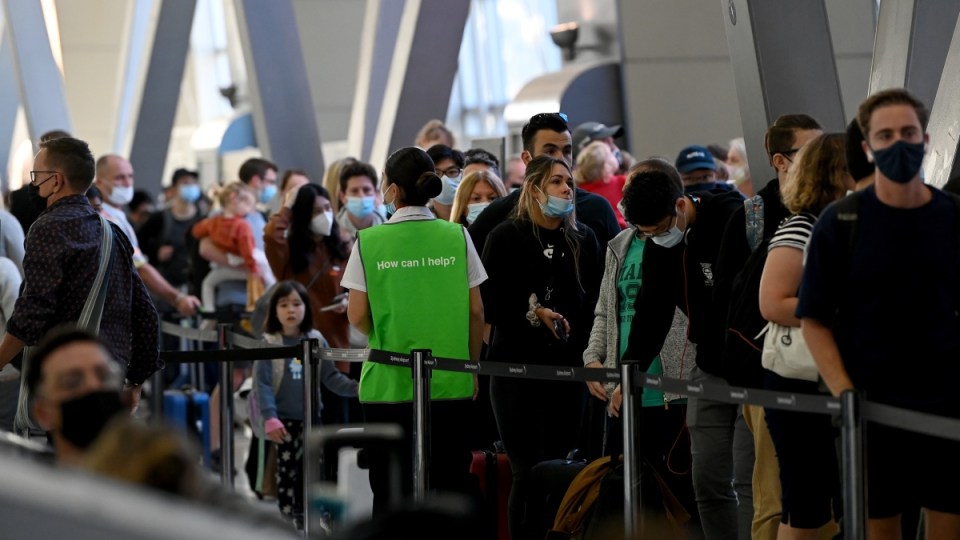 Australian airports are experiencing their busiest day in two years as thousands of people fly out for the Easter long weekend amid chronic staff shortages.

Passengers were asked to arrive at least two hours early for domestic flights as Sydney Airport contended with about 82,000 passengers on Thursday, after a week of long queues caused by staff shortages and rusty passengers.

Almost 60,000 passengers were expected to travel through Brisbane Airport on Thursday, while Melbourne Airport expected about 76,000 a day over the Easter period, and Adelaide expected 25,000 on Thursday and again on Friday.

Prime Minister Scott Morrison said it was terrific to see the tourism industry on the up, but people should expect some congestion.

“While these are very frustrating delays for travellers, as they’re getting away … these are days we were looking forward to during this pandemic,” he said.

“There is going to be some setbacks as the staff come back in, as the system is built up again.

“I’d just ask people to show some patience. I know it is frustrating and I know the airlines and everybody is doing everything they can to turn that around.”

“I look today and I see the crowding at Sydney airport, and it’s understandable,” Mr Joyce said.

“We’ve got five million people that live in the [Sydney] basin and there’s issues there.”

The government intended to spend $55 million at Newcastle Airport to increase international flight capacity, he said.

“I want to apologise in advance to anyone who is inconvenienced,” he said.

Tourism and Transport Forum CEO Margy Osmond said after two years of disruptions to peak holiday periods from lockdowns and border restrictions, the surge in holiday bookings was welcome.

“The pent-up demand created by the Omicron outbreak ruining the Christmas and summer holiday plans of many … is also helping to drive the travel rush,” she said.

Many of those workers lost their jobs at the start of pandemic lockdowns as they did not qualify for federal government JobKeeper payments because they were employed by foreign companies.

“That’s the underlying reason that we’re seeing the staff shortages that are leading to this kind of day, with catastrophic scenes at our airport [in Sydne]),” Mr Caine told the ABC on Thursday.

While he acknowledged absenteeism due to the virus was a factor, he blamed the Morrison government for denying JobKeeper payments to most airport workers, and said airlines had outsourced the jobs of ground staff, baggage handlers and security to foreign companies.

“Those 2000 workers are ready, willing and able to come back to work but Qantas is not putting them back on, and now we’re seeing this panicked response,” Mr Caine said.

It was hard to attract workers back into the aviation industry because of “a degradation of terms and conditions … so there really is a problem”.

The union is calling for an independent commission to address the long-term issues in the industry.

Melbourne Airport CEO Lyell Strambi urged travellers to be patient as the aviation industry adjusted to flights picking up again.

“COVID-19 decimated airlines and airports and resulted in thousands of highly skilled workers being stood down or made redundant,” he said.

“Airlines and their suppliers are now scaling up their workforce but given the safety-critical nature of the jobs they do, recruitment and re-training can take time”.

A Brisbane Airport spokeswoman said more than 59,000 passengers would travel through the domestic terminal on Thursday, with the maximum security processing time between 15 and 20 minutes.

“Our team has done an extraordinary job of managing queues and congestion during the peak times,” she said.