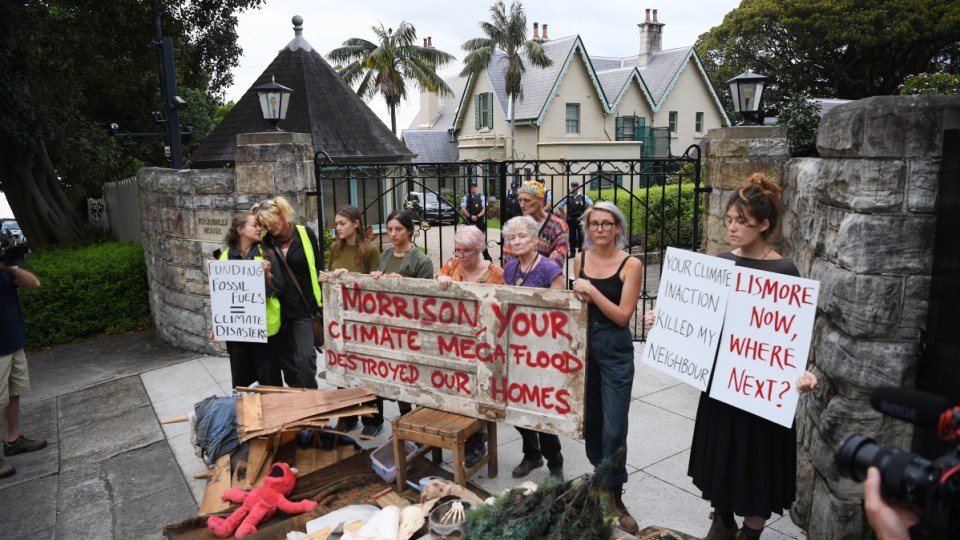 Scott Morrison has been criticised for his government’s response to the flood disaster. Photo: AAP

A group of northern NSW residents have dumped their sodden household goods outside the Prime Minister’s Sydney harbourside residence to protest his handling of the flood crisis.

Up to nine Lismore flood survivors travelled to Kirribilli House from the flood-ravaged northern town on Monday with a tip truck of flood-destroyed possessions.

Their truck was blocked from driving to the Prime Minister’s official residence so they dragged children’s toys, clothing, furniture and carpet destroyed by the floodwaters to the gates of the 1855 sandstone mansion.

They are protesting the federal government’s response to the “climate fuelled mega-floods” on the east coast, the group said in a statement.

“Scott Morrison came to Lismore and refused to speak to us. He snuck in through the backdoor and had a curated experience,” demonstrator Kudra Ricketts, 24, said.

The rapid deluge submerged her home, forcing her to swim in the dead of night in floodwater to help rescue neighbours, she said.

“I lost everything. I lost all of my special possessions, I lost photos of dead relatives that I could never replace,” she said.

“None of us are safe from the effects of climate change while our government continues to … subsidise fossil fuel companies.

“What’s happened to my community is just going to happen to more communities.”

Another member of the group, Kate Stroud, said she sheltered in her roof cavity for six hours before being rescued by a civilian jet-ski. She said she had lost everything.

“We’ve interrupted our clean up and travelled more than 700 kilometres to the Prime Minister’s residence to hold him to account,” she said.

Mr Morrison has promised to open the chequebook and cut red tape for business and welfare support for those affected by the disaster in NSW and south-east Queensland.

The federal government has come under fire for its handling of the unprecedented flooding, with Lismore residents claiming it was too slow to help with the clean-up efforts.

However, he baulked at those criticising the government’s response.

“I think the politicisation of natural disasters is very unfortunate,” he said.

An extra $742 million in joint federal-NSW flood recovery funding was announced for northern NSW last week, pushing the total federal and state package for the state to $1.7 billion.