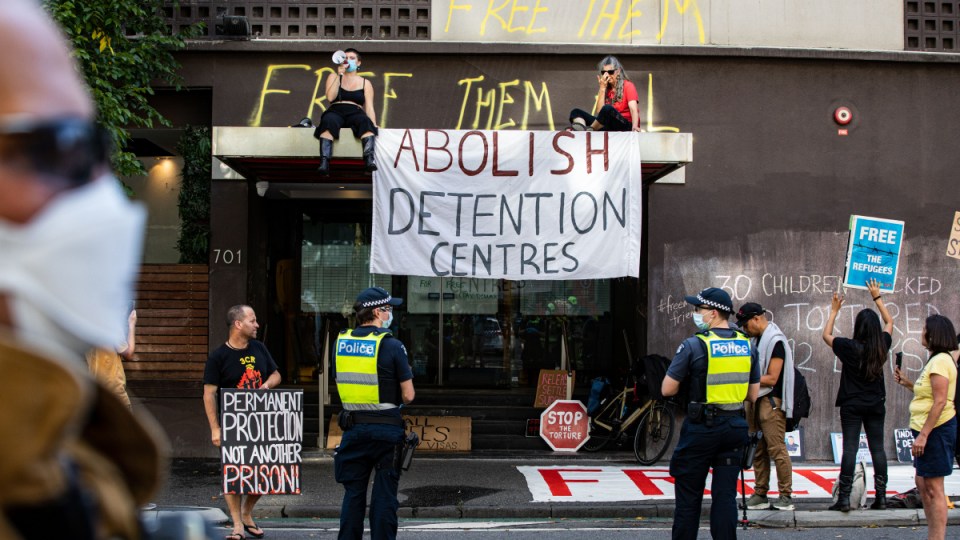 Activists have long demanded internees' release, but not without adequate support. Photo: Getty

Nine men were released from the Park Hotel in Melbourne on Friday night, along with four others in Broadmeadows and three men in Brisbane.

Muhammad Jamal, who has been detained for nine years, said he and eight others were released from the Park Hotel on Friday.

“Today me and 8 other get released from park hotel with the help of community support but still some of our friends are locked inside,” he tweeted.

Refugee advocates said the men were not given a reason for their release on Friday night, and that eight had been put on Bridging Visas with one on a Community Detention Visa.

The Refugee Action Collective said most of the men had been given six-month bridging visas with no access to welfare and little support.

“They have been released to a cheap motel, on a long weekend, with almost no support,” the RAC’s Chris Breen said.

“After eight years in detention, they have been traumatised, institutionalised, denied education and the ability to work and gain skills.

“They should be granted permanent visas, compensated, and given full support, not dumped in the community to fend for themselves.”

AAP understands the bridging visa allows refugees to reside lawfully in the community while making arrangements to leave the country and does not provide a pathway to settlement in Australia.

There are 18 men still detained at the Park Hotel.

‘Policies have not changed’

The Australian Border Force declined to confirm whether any refugees had been released.

“The department does not comment on individual cases,” the ABF said.

“The Australian government’s policies have not changed and illegal maritime arrivals will not be settled in Australia.”

It comes after another Park Hotel detainee, Iranian refugee Mehdi Ali, was resettled in the United States earlier this month, after nine years in detention.

Djokovic was ultimately deported on the eve of the Australian Open after the Federal Court upheld the immigration minister’s decision to cancel his visa.