Shane Warne’s friends on his vacation in Thailand tried in vain to revive the cricket great after finding him unresponsive in their holiday villa on the resort island of Koh Samui.

Warne was rushed to the Thai International Hospital via ambulance, where the 52-year-old was pronounced dead. after being found by Andrew Neophitou, the executive producer of a recently released documentary on Warne’s life and career.

“They were meant to meet some people at 5pm. Neo was next door, he’s always on time,” Warne’s manager, James Erskine, told The Age.

“He realised he wasn’t well. He tried to give mouth-to-mouth, tried to resuscitate him, he had no heartbeat, the ambulance came 20 minutes later and an hour and a bit later he was pronounced dead [at the Thai International Hospital].”

Thai police told Reuters the death from a suspected heart attack is not being treated as suspicious.

“In the villa, the people were sleeping in separate rooms. They were sleeping from afternoon to evening, until about 5pm (local time),” Senior Sergeant Major Suporn was quoted as saying.

“At 5pm somebody came to call out this person for dinner but the deceased did not respond so they called three other friends to perform CPR for 20 minutes. They waited for the ambulance to come,” he said.

The group were reportedly staying at the luxurious Samujana Villas for the weekend. Warne shared a since-deleted image of his infinity pool the first night he arrived at the resort.

As a shocked world absorbs the grim news, Warne is being remembered as a unique character with a zest for life. 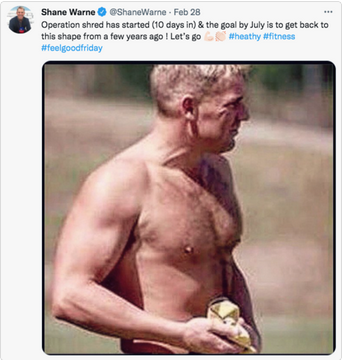 Warne’s death came less than a week after he announced on social media that he was committed to losing weight and getting back into shape.

“Operation shred has started (10 days in) & the goal by July is to get back to this shape from a few years ago,” he wrote above a bare-chested picture of his taut, ripped younger self.

News of Warne’s death came on the same day as that of fellow Australia cricket legend Rod Marsh, who Warne himself had only just publicly paid tribute to.

Named one of the five greatest cricketers of the 20th century by ‘cricket bible’ Wisden when he was still midway through his career, Warne dominated the game as few others ever have.

The legspinner remains Australia’s leading wicket-taker and is second only behind Muthiah Muralidaran globally with 708 dismissals from 145 Tests.

He continued to play Twenty20 cricket in India and Australia until retiring from all forms of the game in 2013, but briefly returned to captain a Rest of the World side in a Bicentenary Celebration match at Lords cricket ground.

He worked regularly as a commentator, as well as holding coaching roles with several T20 sides.

Warne is survived by his three children, Brooke, Jackson and Summer, with former wife Simone Callahan, who have been been offered a state funeral by Victorian Premier Daniel Andrews.

“Our hearts are breaking for Shane’s family and friends,” said Mr Andrews, who has ordered that the MCG’s Great Southern Stand would be renamed the S.K. Warne Stand as a “permanent tribute to an amazing Victorian”.

“Nobody who saw Shane Warne play will ever forget him.To us, he was the greatest – but to his family, he was so much more.”

At the MCG, where Warne thrilled crowds and chalked up some of his greatest triumphs, flowers, meat pies and beer cans have been laid in tribute at the feet of his concourse statue.

Prime Minister Scott Morrison said the nation was “bewildered” by the shocking news.

“There was none like Shane,” Mr Morrison tweeted. “He lived his life his way.”

Labor Leader Anthony Albanese hailed Warne as one of the greatest cricketers the game has known.

“It was a joy to watch him play,” Mr Albanese tweeted. “My thoughts go to the ones who loved him the most. We will miss you Warnie.”

“He brought such joy to the game and was the greatest spin bowler ever,” he tweeted.

Commonwealth Seniors Health Card eligibility is changing. Here’s how to find out if you qualify
‘This can’t be true’: Tributes flow as world left shocked by Shane Warne’s death
Today's Stories