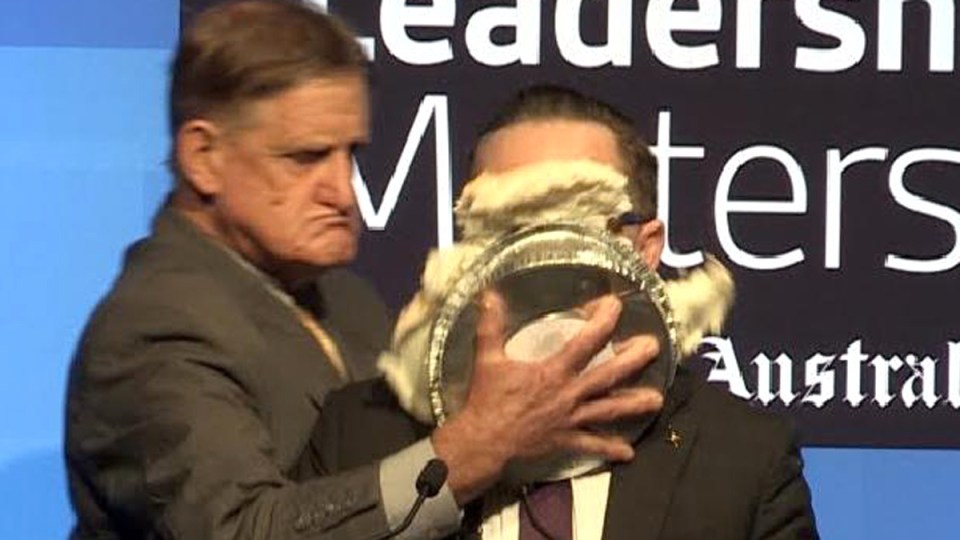 Anti-vaxxers overseas are falsely claiming that the Qantas CEO was pied in the face over mandatory vaccinations. Photo: TND

An old clip of Qantas CEO Alan Joyce getting a pie to the face has resurfaced in American anti-vaxxer circles.

A growing number of posts on TikTok claim Mr Joyce was pied by a disgruntled employee because of the airline’s mandatory vaccination policy.

But the footage is actually from 2017, when the airline boss was pied for his marriage equality advocacy.

Anti-vaxxers started sharing the video in mid-2021, but it has exploded in popularity in recent weeks.

Almost all include the same caption: “Man puts a pie into this airline CEO for forcing vaccinations. Good job sir. Epic.”

The misleading post has also spread on so-called “free speech” platforms such as Gettr, Gab, Rumble and BitChute. They are popular with anti-vaxxers and conspiracy theorists who’ve been banned from mainstream social networks.

The recent spread of the claim led American fact-checking organisation Politifact to debunk it this month.

“We rate the claim that Joyce was pied in the face for forcing COVID-19 vaccinations false,” the organisation concluded.

Although the post about Mr Joyce getting pied was false, Qantas does require all staff and passengers to have at least two shots of a COVID vaccine.

It’s a policy being adopted by many of the world’s airlines to minimise the spread of the virus in enclosed spaces such as planes, as well as to slow its spread across borders.

Some employees have protested. But with almost 95 per cent of Australians aged 16 and over double-vaccinated, the rules do not affect the vast majority of staff and passengers.

At the time of the incident, Mr Joyce vowed to press charges against the man who smashed a lemon meringue pie in his face.

The culprit was Perth man Tony Overheu, a former farmer and devout Christian, who said he was protesting “corporate bullying aimed at social engineering” but later expressed his regret.

The Qantas CEO, who is gay, had signed a letter with 19 other Australian business leaders calling on then-PM Malcolm Turnbull to legislate marriage equality.

Mr Overheu was fined $3600 and his lawyer said he had been “banished” from his church.

“You’ve attracted widespread condemnation and public ridicule, and even members of your own family have severed ties with you,” magistrate Greg Smith said at his 2017 sentencing.

Mr Overheu was also banned for life from flying with Qantas.