The Canberra Convoy protest will hold a large rally on Saturday. Photo: AAP

Up to 4000 anti-vax, anti-lockdown or so-called Sovereign Citizen protesters are today expected to converge on Canberra – one of the most vaccinated cities in the country – for what could be the final major rally.

Unlike the previous two weeks of protests and soapbox speeches, Saturday’s event is expected to be more structured, feature prominent speakers, and possibly even include live music.

“We are expecting a significant protest to occur [on Saturday] at around 10am,” ACT Policing Commander Linda Champion told reporters.

Politicians including Craig Kelly and George Christensen intend on showing up and will likely speak.

A “convoy” of politically-connected organisers from Melbourne anti-lockdown protests will arrive in Canberra.

“I suspect it’s going to be a glittering night of stars,” far-right researcher Dr Kaz Ross told The New Daily.

Also among the Melburnian contingent is seasoned organiser Monica Smit, who was arrested for incitement in 2021 and raised around $250,00 in legal fees, plus her partner Morgan Jonas.

“Lots of people are going … three million, let’s do three million,” Ms Smit posted on social media on Friday during her drive to Canberra.

ACT Policing is bracing for a more realistic figure of 4000 protesters. 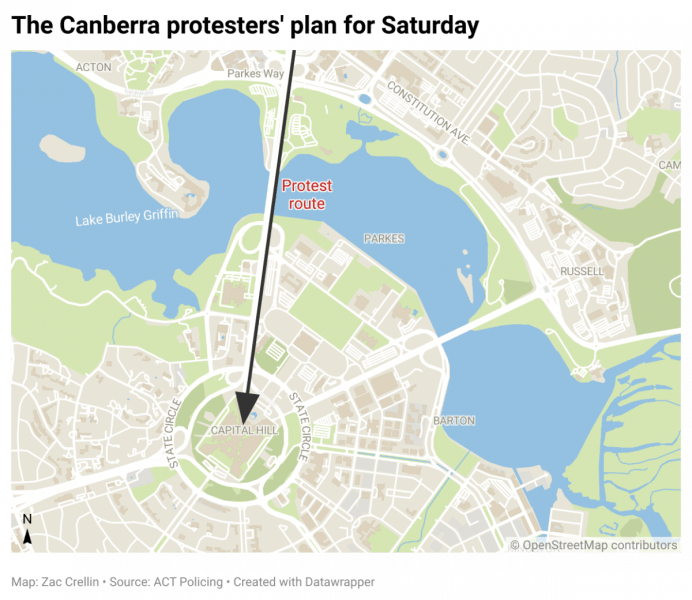 The protest is expected to kick off at Commonwealth Park, before marching to Parliament House. Police will block off parts of Commonwealth Avenue.

INXS drummer Jon Farriss, who more recently helped found an anti-vaccine parents’ group, also announced he would be in attendance on Saturday and invited people to join him “as sovereign, living humans”.

In addition to the Parliament House rally, some protesters plan on disrupting a children’s vaccination event at the Australian Institute of Sport.

Superhero Day will be held at AIS Arena, and children are encouraged to dress up as their favourite superhero and get vaccinated.

A team member from Canberra Health Services described it as a “super-fun, super-relaxed superhero day just for kids”.

However, anti-vax protesters are said to be planning on disrupting what they believe to be “a mass vaccination event”.

“It might be nice to circumnavigate the whole place in our cars to let them know that we’re watching them,” a speaker said on Thursday.

ACT Policing is also aware of this second protest.

“We will ensure everybody attending that event can do so safely,” Commander Champion said.

Time to pack up camp

ACT Policing has ordered the protesters camped at Canberra’s EPIC Exhibition Park to leave by midday on Sunday, in order for the Canberra Show to begin setting up.

Chief Minister Andrew Barr said that a $25,000 camping fee had been paid, but that the booking wouldn’t be extended so as not to clash with other events.

The Convoy to Canberra crew have been issued with a formal direction to leave by midday this Sunday.
The #dumbernats are over. pic.twitter.com/csnPv2ad8R

“Anybody who’s ever been to an uni party or a teenager’s party will know,” she said.

“You say to those kids, ‘Sunday morning, 12 o’clock, the whole house has got to get cleared’, but they’ll still be in bed – like, what are you talking about?”