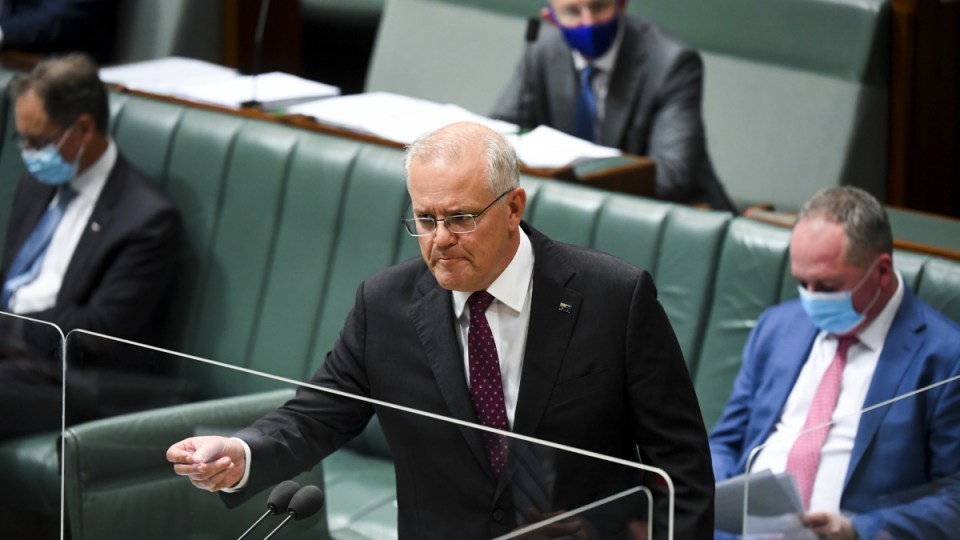 Scott Morrison has backed down from a promise to legislate a federal anti-corruption commission. Photo: AAP

Prime Minister Scott Morrison wants former Australian of the Year Grace Tame to give his government the name of the agency she says told her not to criticise him.

It came as the federal government on Thursday appeared to walk back from its announcement it would launch an investigation into the “threatening” call made by an unnamed senior member of an agency.

“While [Ms Tame] has declined to name the individual, I would at least invite her to advise the government which government-funded agency she is referring to,” Mr Morrison told parliament.

“[We] would be pleased to pursue the matter … if we had some knowledge of even the agency that has been referred to.

“Inquiries can only be made where we can be directed.”

Ms Tame told the National Press Club on Wednesday the caller asked for her word that she would not say anything “damning” about Mr Morrison at January’s 2022 Australian of the Year Awards.

“You’re an influential person. He’ll have a fear … with an election coming soon’,” she recounted the person saying of Mr Morrison.

On Thursday, Mr Morrison reiterated in parliament that the comments “were not made on my behalf, nor would they ever be, and they were not made with my knowledge in any way, shape or form or by my office”.

Women’s Safety Minister Anne Ruston initially said the government had launched an investigation, before clarifying it was up to Ms Tame about whether she wanted it taken further.

The National Australia Day Council earlier issued a statement saying it canvassed personnel who had spoken with Ms Tame in the past year following the claim aired at Wednesday’s National Press Club event.

“None of whom had interactions … that would be considered ‘threatening’ as the 17 August conversation has been described,” the organisation said.

Ms Tame tweeted it was “not about the person who made the call” but “the fact they felt like they had to do it”.

The bill contained the first of a series of Ms Jenkins’ recommended reforms that meant political staffers would need reasons in writing if they were being fired.

“These amendments will prevent staff being arbitrarily fired for no reason other than that they have become a political problem from their employer,” Greens senator Larissa Waters said.

“We know the sweeping powers of parliamentarians to fire staff without cause has been a significant barrier for staff to come forward, fearing their job – not the job of their abuser – would be at risk.”

The bill also clarifies MPs’ obligations under work health and safety legislation, as well as age and disability discrimination laws.

Senator Waters welcomed the progress. But she said it didn’t go far enough and called on the government to back separate recommendations by Ms Jenkins that employees have a positive duty to prevent workplace harassment.