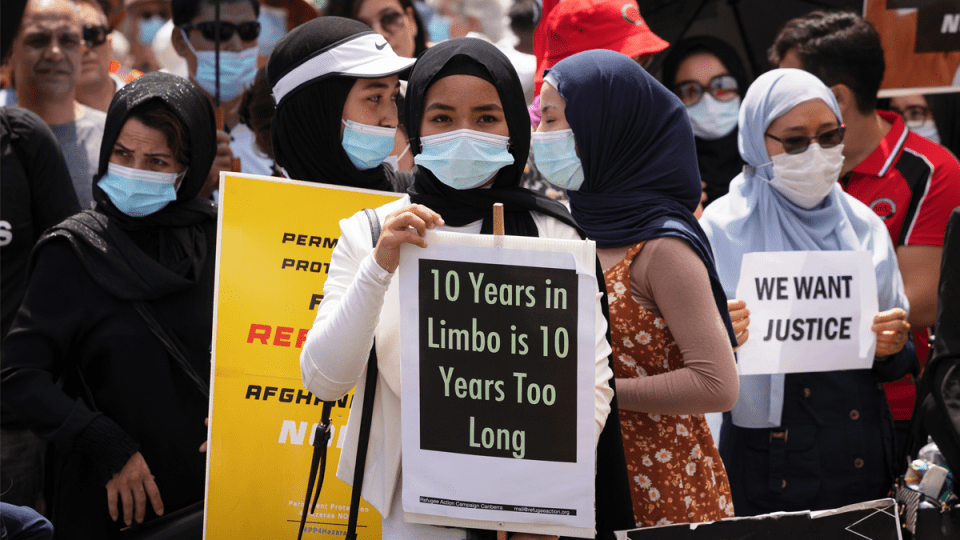 Afghan refugees want the government to give them permanent protection. Photo: Getty

More than 2000 people protested outside Parliament House on Tuesday to call on the government to grant Afghan refugees permanent protection and reunite their families.

The majority of the protesters were Hazaras, one of the most persecuted ethnic groups in the world who now face grave danger with the Taliban back in power.

But because many of them arrived in Australia by boat, they can only stay in Australia temporarily and can’t bring their relatives over to safety.

“Afghanistan is not safe – it’s in war and we cannot go back there,” Hazara refugee advocate Zaki Haidari told The New Daily.

“But the main thing is, we have our families living there, and there’s a lot of fathers here who have their family trapped in Afghanistan under the same regime which they were forced to flee.”

The Taliban had accused his father, a medical doctor, of working with international groups and he was never seen again.

The Australian government deemed Mr Haidari to be a genuine refugee fleeing persecution, but because he arrived by boat, he’ll never stay permanently in Australia under current policy settings.

The temporary protection visas given to refugees who arrive by boat also don’t allow them to sponsor their loved ones to come over.

Mr Haidari’s mother and three siblings are still in Afghanistan.

“My siblings have just finished university. One of them is a doctor, my sister is a midwife and the other sister is a nurse,” he said.

“So they’re in great danger and I can’t help them. They call me every day crying for help, and I can’t do anything for them.”

Afghan refugees in Australia say the government has ignored them for more than a decade.

The Department of Home Affairs did not reply to TND‘s request for comment.

Under Australia’s zero-tolerance border policy, nobody who arrives by boat is allowed to settle permanently, even if the government deems them to be genuine refugees in need of protection.

Unlike refugees who arrive by plane, people on temporary protection visas must reapply every three to five years, and they can’t easily leave the country to reunite with their loved ones, or grieve for them.

Melbourne-based immigration lawyer Carina Ford said many Afghan refugees, and Hazaras in particular, are living in “a state of limbo” simply because they arrived by boat.

“The longer a person waits for their visa situation to be sorted, the more impact it has on their mental health,” Ms Ford told TND.

“Afghanistan just articulated that. We’ve already had TPV holders who have lost relatives, or have lost children, on the journey leaving Afghanistan.”

Ms Ford said this policy designed to stop people arriving by boat is now punishing Afghans for whom Australia is home, as well as their families overseas.

These relatives tend to be women and children.

One of Ms Ford’s clients in Australia had a young daughter who died of COVID-19 while transiting in Pakistan.

Mr Haidari said more than 10 Hazara refugees in Australia have taken their own lives because they feel so helpless about saving their families.

“Knowing that their families are in danger, some of the fathers can’t take the toll,” he said.

“We don’t want to lose more community members. We want the Australian government to acknowledge the mental health crisis, and provide people with permanent protection.

“The suffering has to stop.”

The Convoy to Canberra

The Afghan refugee protest was held outside Parliament House, where anti-vaxxers, so-called Sovereign Citizens and other groups have been protesting against the government for more than a week.

However, the two groups got along without any major issues.

Mr Haidari said the Convoy to Canberra protesters were respectful and even quietened down for a bit to let them hold speeches.