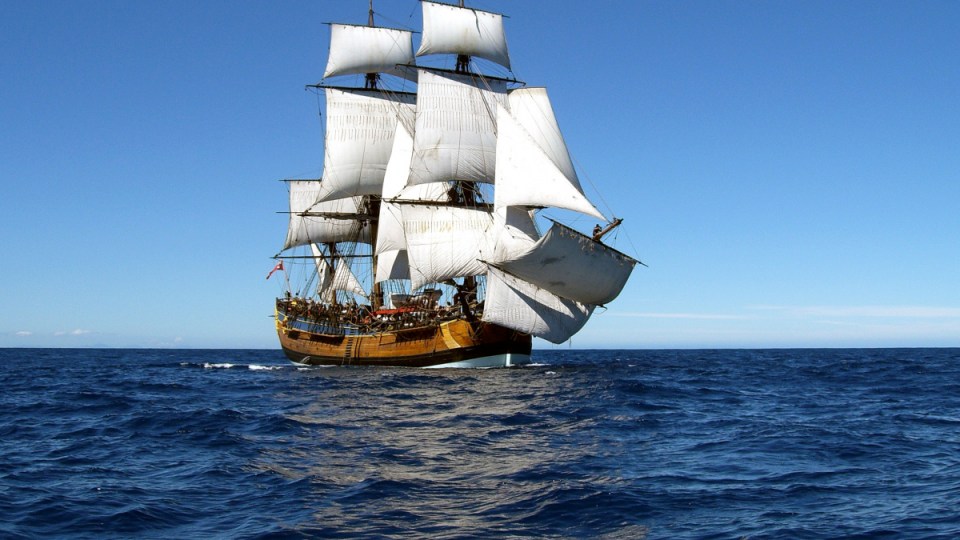 The shipwreck of James Cook's Endeavour has been identified. Photo: AAP

The wreck of British explorer James Cook’s ship Endeavour has been identified after languishing on the bottom of Newport Harbour in the US for more than two centuries.

“We can conclusively confirm that this is indeed the wreck of Cook’s Endeavour,” he said at the museum in Sydney.

“This is an important moment. It is arguably one of the most important vessels in our maritime history.”

But Thursday’s jubilant announcement sparked fury on the other side of the world, with the head of one of the organisations involved in the decades-long search accusing Australia of jumping the gun.

Cook famously sailed the ship around the South Pacific before landing on the east coast of Australia in 1770.

Mr Sumption said the Endeavour played an important role in exploration, astronomy and science and was an important artefact in the history of Australia, New Zealand, Britain and now the US.

A “preponderance of evidence” had led to the conclusion that an archaeological site known as RI2394 in Rhode Island’s Newport Harbour did “indeed comprise of the shipwreck of HM Bark Endeavour”, he said.

He and Rhode Island Marine Archaeology Project executive director Kathy Abbass had revealed nearly four years ago that they suspected the Endeavour was one of the shipwrecks on the bottom of Newport Harbour.

But not everyone agrees that the find is confirmed  – yet.

Within minutes of Mr Sumption’s announcement, Dr Abbass accused the Maritime Museum of jumped the gun in declaring the wreck the Endeavour. The RIMAP “is now and always has been the lead organisation for the study”, she said.

Dr Abbass said Thursday’s announcement breached a contract between the two organisations. Despite finds “consistent with what might be expected of the Endeavour”, there had been “no indisputable data” yet found to prove it “and there are many unanswered questions that could overturn such an identification”, she said.

A “legitimate report” would be posted on the RIMAP website when the study was complete, Dr Abbass said.

“RIMAP recognises the connection between Australian citizens of British descent and the Endeavour, but RIMAP’s conclusions will be driven by proper scientific process and not Australian emotions or politics,” she added.

In response, Kieran Hosty, from the ANMM, claimed Dr Abbass had been sent a report 10 days ago outlining the museum’s findings.

“I can’t answer the question about breach of contract. As far as I’m aware the contract with the Rhode Island project expired in November last year,” he told the ABC on Thursday.

“Going onto the actual jumping the gun that we haven’t got enough information, I disagree with that.

“Having worked with Dr Abbass to investigate the Endeavour shipwreck site for 22 years, the museum acknowledges that she is entitled to her own opinion regarding the vast amount of evidence we have accumulated.”

Since 1999, maritime archaeologists had been investigating several 18th century shipwrecks in a five-square-kilometre area of Newport Harbor, where the ship was scuttled 244 years ago.

It is believed the British sunk the vessel and 12 other British ships in Newport Harbour as a tactic to block the French, who were allies of rebelling American colonists, from entering in 1778.

Although only about 15 per cent of the vessel remains, several details on the wreck convinced archaeologists they had found Endeavour after matching structural details with 18th-century plans of the ship.

Researchers are now focused on what can be done to protect and preserve the historic remains.

Mr Sumption said the museum was looking to “borrow some material at a future date to come to Australia and be on display”.

Launched in 1764 as the Earl of Pembroke, the ship was renamed Endeavour in 1768 by Britain’s Royal Navy and prepared for a major scientific voyage to the Pacific.

From 1768 to 1771 Endeavour sailed the South Pacific, primarily to record the transit of Venus in Tahiti in 1769.

Captain Cook, who was also an acclaimed navigator and cartographer, then sailed it around the South Pacific searching for “the Great Southern Land”. He charted the coast of New Zealand and Australia’s eastern coastline before claiming the land for Britain on August 22, 1770.

Michelle Grattan: Morrison’s defeat is a victory for Independents, and the Greens
Go-ahead for COVID boosters for teenagers
Today's Stories

Shipwreck in US confirmed as Cook’s Endeavour