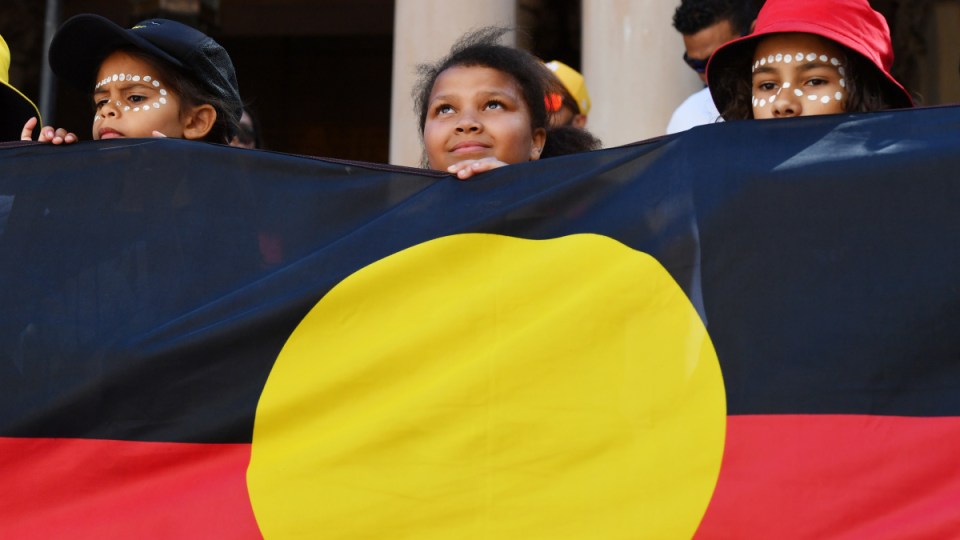 The Australian government has taken over the flag's copyright. Photo: AAP

The Aboriginal flag “belongs to everyone” after the federal government completed a deal to take ownership of its copyright.

Previously owned by the flag’s designer Harold Thomas and a non-Indigenous clothing company, the flag is now freely available for public use.

It comes after a number of Indigenous groups were sent cease and desist warnings for using the flag in an apparent breach of copyright.

Minister for Indigenous Australians Ken Wyatt said it was “profoundly important for all Australians”, adding “no one can take it away”.

“Over the last 50 years we made Harold Thomas’ artwork our own — we marched under the Aboriginal flag, stood behind it, and flew it high as a point of pride,” he said.

“In reaching this agreement to resolve the copyright issues, all Australians can freely display and use the flag to celebrate Indigenous culture.”

Carroll and Richardson Flagworld will remain the exclusive licensed manufacturer and provider of Aboriginal flags and bunting.

But Flagworld won’t restrict individuals from making their own flag for personal use.

As part of the deal, the commonwealth will put all future royalties received from Flagworld’s sale of the flag towards the work of NAIDOC.

Now the Aboriginal flag can be used as a symbol for all to gather under. [-0-]

Aus is indebted to Harold Thomas for the flag that so brilliantly represents the pride & struggles of First Nations Australians. #Freetheflag #Flagisfreed @clothingthegapshttps://t.co/mlJf5jnOIS pic.twitter.com/BmxdgoDuuv

As well an annual scholarship in Mr Thomas’ honour will be provided to Indigenous students and an original painting celebrating the flag’s 50th anniversary will be displayed by the government.

Mr Thomas says he will use $2 million to make an Australian Aboriginal Flag Legacy not-for-profit.

“The Aboriginal flag design is my dreaming, intertwined with my wife’s family and mine, our ancestral belonging. The land, and the landscape, is indelible in my make-up; it courses through my consciousness and subconsciousness,” he said.

“The flag represents the timeless history of our land and our people’s time on it. It is an introspection and appreciation of who we are. It draws from the history of our ancestors, our land, and our identity and will honour these well into the future.”

Prime Minister Scott Morrison was thankful the flag had been put in public hands.

“The Aboriginal flag will now be managed in a similar manner to the Australian national flag, where its use is free, but must be presented in a respectful and dignified way,” he said.

“All Australians can now put the Aboriginal flag on apparel such as sports jerseys and shirts, it can be painted on sports grounds, included on websites, in paintings and other artworks, used digitally and in any other medium without having to ask for permission or pay a fee.”

All Australians can use Aboriginal flag after Commonwealth secures copyright