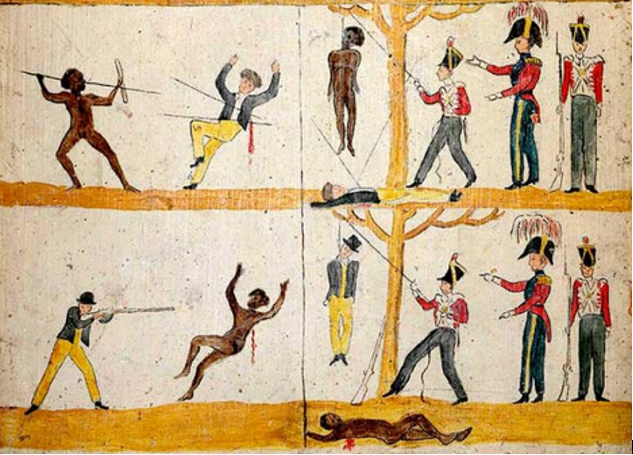 Governor Lachlan Macquarie issued this poster to assure Aborigines that justice did not depend on race, but the truth proved otherwise. Photo: NSW Library

COVID has forced what has been the largest anti-Australia Day protest off the streets as a new poll reveals public sentiment to change the date is gaining widespread support, especially among the young.

Warriors of the Aboriginal Resistance, described as “a collective … committed to the cause of decolonisation”, has announced it won’t protesting, the first time since 2015 the group hasn’t taken to the streets of Melbourne.

“We want to be on the street fighting for our people but the time isn’t now,” the organisation said, directing people to an online event instead.

Australia Day, celebrated on January 26, marks the date the First Fleet raised a Union Jack at Sydney Cove, called Warrane by the Aboriginal people who fished and lived there.

Close to 234 years later, the date and holiday remain an ongoing source of contention that increasingly divides generations.

CoreData surveyed 1292 people and found “a generational and gender divide among Australians over the significance of the day and its position in the calendar”.

The research consultancy asked whether people planned to celebrate, whether they supported moving the holiday to another date and how their opinions had changed in recent years.

Overall, 54 per cent of respondents said they planned to mark the occasion, with 30 per cent saying they would be celebrating the history and achievements of Australia and 15 per cent “just because it was a public holiday”.

More than two-thirds of respondents aged 26 and under say they won’t be celebrating on January 26, with just over 30 per cent saying they will.

Opinions were more evenly split among 42- to 55-year-olds but the majority still supported keeping the holiday on its current date.

There were also less significant discrepancies in gender.

Men were less likely to support changing the date or having a holiday to reflect on Australian and Aboriginal history than women and were more likely to celebrate Australia Day.

CoreData says “the political overtones” attached to the day and its meaning have “given younger Australians pause to think”.

About 40 per cent of the youngest surveyed group and 30 per cent of the next oldest category said their opinions had changed in recent years “due to their perceptions of the political meaning of the day”.

In contrast, fewer than 10 per cent of the two oldest categories have adjusted their view.

The tide is turning against celebrating Australia Day: Survey